Two of the best performing macro hedge funds of recent weeks have a tip for investors: Buying the dip in stocks may not work this time.

After their worst slump since the financial crisis, U.S. shares surged on Monday as central banks signaled a unified response to any impact from the spreading coronavirus that threatens to tip the global economy into recession. But Quadriga Asset Managers’s Diego Parrilla says buyers should beware.

“This could become a textbook bull trap: the market rallies, you think it’s over, mommy and daddy are going to intervene,” said Parrilla, referring to central banks and governments. “If this doesn’t really play out, it’s game over.” His US$250 million Quadriga Igneo fund surged about 10 per cent last month.

Buying the dip has been one of the most profitable trades over the past decade as central banks have repeatedly intervened and eased monetary policy. That’s kept the longest bull-market rally on record humming and investors counting on even more stimulus should the virus threaten economic growth. Indeed, the Reserve Bank of Australia kicked off the expected global response on Tuesday with a quarter-point rate cut. 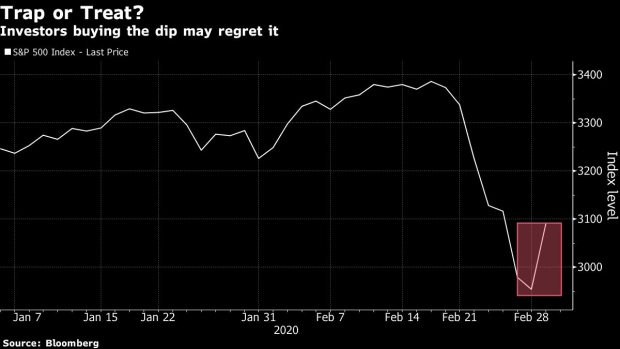 This time around, the stimulus could prove impotent. Haidar Capital Management’s Said Haidar expects the spread of the virus, which has so far infected more than 90,000 people and killed over 3,100, to drag out. Efforts to contain it are having a serious negative effect on economies around the globe and central banks’ easing won’t turn them around, he says.

Investors have been “trained like monkeys to buy the dip,” said New York-based Haidar, whose Jupiter Fund gained 7.8 per cent in February. “If you look back far enough, there were periods when buying the dips were a disaster and could be again this time.”

Haidar and Parrilla aren’t alone in their warnings. Seema Shah, chief strategist at Principal Global Investors, said last week that investors should look to protect their portfolios and resist the urge to buy the dip, while Goldman Sachs Group Inc. strategists Zach Pandl and Kamakshya Trivedi said the drawdown in risky assets has further to go.

Not everyone is taking heed: many hedge funds piled in last week as the market plunged into a correction. Their purchases got more frenetic than any time in more than two years on Thursday, when the S&P 500 dropped 4.4 per cent according to data compiled by Morgan Stanley’s unit that lends money and settles trades for hedge funds.

Haidar’s US$650 million hedge fund is now up almost 23 per cent this year after a 31 per cent gain in 2019, according to a letter to investors seen by Bloomberg. Madrid-based Parrilla’s fund is up almost 20 per cent in the first two months, he said.

The two are emerging as some of the biggest winners in the old-fashioned macro trading world. Such traders shift through trends in global economies and geopolitics to bet on everything from currencies to interest rates to stock indexes. Their strategies are rebounding from years of mediocre returns amid unprecedented monetary easing and depressed volatility.

“I fear this could be the beginning of something bigger,” Parrilla said. “It happened to be the coronavirus, but to be honest, it could have been anything.”

Parrilla made money last month through options trades that benefited from rising gold, U.S. dollars and treasuries and declines in the S&P 500 index and emerging market currencies. He expects gold to continue its surge and a devaluation in China’s currency as the country is forced to stimulate its economy. Shorting yuan “is the biggest macro trade in generations,” he said.

Haidar had been betting on haven assets such as gold, swiss francs, yen and bonds. He said investors should be long bond markets globally because they’ll rally regardless of whether central banks cut rates.

“Will stocks rally if they cut rates? I am actually skeptical,” he said.