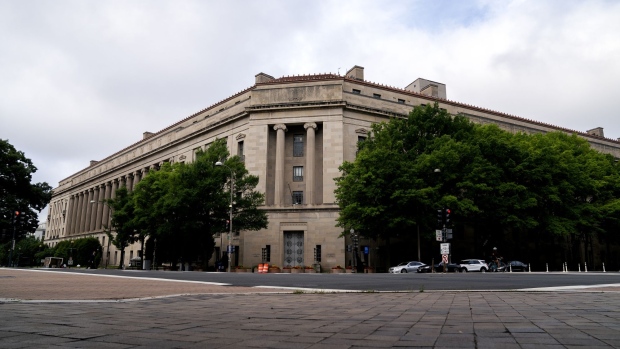 Far off the hedge fund world’s usual map is a small firm in Toronto, filling out the second floor of a tidy brown office tower, just above a pizzeria.

From that perch, Anson Funds and its 41-year-old leader, Moez Kassam, have been posting returns that are multiples the industry norm. It’s also punching above its weight in controversies. Reddit boards and websites have sprung up to question the propriety of how it bets on the ups and downs of stocks. So too have lawsuits.

And now, Anson has an unwelcome distinction in a U.S. Justice Department inquiry examining the tactics used by short sellers: Of dozens of firms that Bloomberg has identified as being mentioned in prosecutors’ sweeping requests for information and communications, Anson is among a smaller number that have been subpoenaed directly, according to people familiar with the matter. Exactly what’s prompting that level of attention isn’t clear.

A Justice Department spokesman declined to comment. Kassam referred questions to a lawyer who offered no comment.

On the roster of money managers and stock researchers whose names have surfaced in connection with the U.S. inquiry, Anson stands out to Wall Streeters as one of the lesser-knowns -- hardly on the same level as famous bears such as Muddy Waters, Kerrisdale Capital and Citron Research, whose blunt critiques of public companies have set off a number of market dramas.

But in Toronto’s investing scene, Kassam’s profile has been rising, and the firm he’s run since 2007 has been gaining momentum. In the past four years, Anson Funds has more than tripled assets under management beyond US$1.5 billion. In each of the past two years, it’s posted returns of around 45 per cent -- lifting its average annual gain since inception to almost 16 per cent. That’s more than three times the typical yearly return churned out by long-short funds in that period, according to Bloomberg hedge fund indexes.

Around Toronto, Kassam has cultivated the profile of an investing savant turned philanthropist, and he’s developed a powerful network. A few years after Toronto Life did a photo spread on his three-day wedding celebration, the magazine’s editor joined other business leaders on the board of his charity.

On Instagram, he posts prolifically under the username MunchingMoez to some 5,600 followers, chronicling his adventures in dining and society. Recent snapshots there show him celebrating a birthday with executives atop larger Canadian funds -- K2’s Shawn Kimel and RP Investment Advisors’ Richard Pilosof -- as well as TD Securities’ freshly retired head of markets, Moti Jungreis. Kassam often refers to his rotating cast of companions as “the crew.”

While Anson pitches itself as a relatively conservative long-short company, some attribute its winning performance to aggressive investment strategies that have proved legally contentious. The firm has been sued or countersued at least five times over a variety of allegations it engaged in deception -- claims that Anson has vigorously denied. Plaintiffs include corporations that it’s bet against, a company shareholder and a short-selling researcher who went from collaborating with Anson to attacking it.

The thinking among Anson’s executives is that the firm attracts outsize criticism because it’s among relatively few hedge funds in Canada that take significant short positions, a realization that’s led it to emphasize long bets instead, according to a person with knowledge of the matter, who asked not to be named discussing internal conversations. It also blames the estranged researcher for stoking unwanted attention.

Anson is named for British Admiral George Anson, who rose to fame in the 18th Century by embarking on a perilous circumnavigation of the globe. Ships in his group were lost to the seas, but along the way he got rich by capturing a Spanish galleon laden with silver. The firm’s headquarters features a large wooden map tracing that four-year voyage, as well as one of Admiral Anson’s quotes: “Prudence, intrepidity and perseverance.” The firm is officially registered in the Cayman Islands and has an outpost in Dallas.

Being in Toronto has advantages. Several years ago, a stock bubble formed in Canada as investors bid up shares linked to its nascent cannabis industry. With banks reluctant to provide much support to the sector, Anson was among money managers that helped startups raise money. It also bet against them.

On some occasions, people with knowledge of its operations said, Anson engaged in a controversial practice of betting that shares of cannabis companies would fall, and later participating in their secondary stock offerings -- sales that often trigger price drops. The Globe and Mail reported on the strategy in 2019.

Canadian regulations are looser than those in the U.S., making it easier for investors to legally use discounted shares from such an offering to finish up -- or “cover” -- earlier short sales, said Paul Davis, a securities lawyer in Toronto who has sought more-stringent rules for short sellers. “We don’t have the outright prohibition that exists in the U.S.,” said Davis, a partner at McMillan. But securities regulators are considering a proposal that would bar such trading, he said.

Investors should still ensure their bets against a stock aren’t based on non-public information about an imminent offering, Davis said. “If you know a financing is coming and then you short -- and then know you’re going to participate in secondary financing -- that raises several issues,” he said.

Anson was sued for a different type of bearish bet in 2015. Nobilis Health Corp. accused the firm of a “short attack” based on false information. Nobilis’s chief executive officer at the time, Chris Lloyd, said he personally met with representatives of Anson who expressed interest in investing, according to court records. Several months later, Nobilis was criticized in a blog post written under a nom-de-plume that was eventually tied to Sunny Puri, a portfolio manager at Anson.

In court, Anson defended Puri’s article, saying it was based on public information and discussions with management. Anson even countersued, claiming Nobilis’s response defamed the fund. An online docket for the case shows it has been dormant since 2017, indicating the dispute has been resolved.

Publishing bearish research has become more perilous in recent years as companies take critics to court. In response, some hedge funds have struck up behind-the-scenes relationships with third-party researchers -- sometimes paying for insights or commissioning reports. To critics of short sellers, those ties look like conspiracies to drive down stocks, prompting demands for probes.

The Justice Department is now prying into those relationships.

Anson has privately worked with several researchers whose communications have been sought by U.S. investigators, according to people with knowledge of the dealings. They include Citron’s Andrew Left and Spruce Point’s Ben Axler, both of whom declined to comment. Neither has been accused of wrongdoing in the investigation.

One of Anson’s relationships with an independent researcher blew up in court.

A few years ago, Anson sued Robert Doxtator, accusing the one-time ally of defamation, alleging he was behind a flurry of online posts attacking the hedge fund’s trading strategies.

Doxtator denied that and shot back: The fund owed him for giving it a heads-up on a bearish report on General Electric Co. in 2019. On Aug. 15 of that year, famed market investigator Harry Markopolos published research on the conglomerate that caused the share price to drop. In court records, Anson said it received “GE Diligence” from Doxtator at about that time and placed profitable bets the stock would fall.

There’s no indication in court documents that Anson worked directly with Markopolos. He didn’t respond to messages seeking comment.

Doxtator estimated the trades yielded millions of dollars in profit and said Kassam had promised to pay him 15 per cent of any proceeds, according to court records. Kassam told the court that he and Doxtator were in touch on WhatsApp during the bets and that they made just over US$121,000. That meant the researcher’s 15 per cent cut would amount to US$18,000.

The lawsuit is still pending. As part of its probe, the Justice Department has been asking short sellers for information on their wagers against GE, as well as dozens of other stocks, according to people with knowledge of the matter.

Even the trade that Kassam calls Anson’s most profitable long bet has attracted controversy.

In 2017, the firm began betting on children’s television programming company Genius Brands. In an interview published by ValueWalk last month, Kassam said he believed in the quality of the company’s content and provided financing to get cartoons into production.

Anson ramped up the stake in early 2020, according to a lawsuit filed by another Genius Brands shareholder. Anson was allegedly among a group of noteholders that reached a deal to pay 21 cents a share with a promise not to sell for a few months, while other investors acquired stock with a lockup period of 1 1/2 years. Several weeks later, the share price rocketed upward, briefly soaring beyond US$11 amid a flurry of online commentary suggesting Walt Disney Co. or Netflix Inc. could buy the company. Neither ever did.

The shareholder lawsuit estimates Anson and the other defendants made more than US$100 million on the stock’s flight. Anson has asked the court to dismiss the case.

Meanwhile, other stockholders haven’t fared nearly as well. Genius eventually gave up much of the gains and is now back to trading for around US$1.