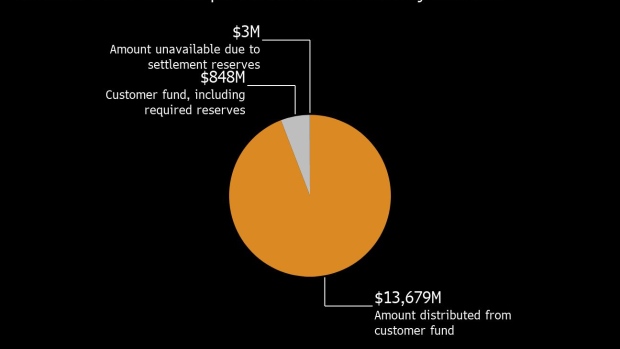 (Bloomberg) -- Wasim Rehman is a go-to person for investors desperate for an exit in the messy world of trading troubled, hard-to-sell assets — a sector that’s set to explode as sanctions against Russia and the ongoing equities meltdown create mountains of illiquid holdings.

But Rehman — who has invested in more than 200 funds in liquidations in the 13 years since retiring at age 28 as the youngest partner of hedge fund giant Marshall Wace — has a message for those tempted by the steep discounts of so-called side-pockets that money managers create to separate out their problem bets:  Sometimes it takes more than just patience.

Take his 2014 purchase of claims tied to fraudster Bernie Madoff, mastermind of the biggest financial con job in history. The drawn-out effort to unwind that investment forced Rehman, one of the biggest players in the secretive world of side-pockets, to come out of the shadows, turn activist against the executives responsible for liquidating the assets and even prepare to take his battle to the courts. Rehman says it could still take years before he turns a profit on his bet.

“This is one of the worst-run liquidations I have experienced and to date is the only situation in which I have taken an activist approach,” the London-based investor said in an interview.

Rehman’s ordeal is a cautionary tale for investors after sanctions against Russia following its invasion of Ukraine trapped funds with billions of dollars of holdings of stocks, bonds and currencies they can’t easily offload. The ongoing selloff in growth stocks also threatens to lock investors in unlisted securities bought by hedge funds.

Already, hedge funds like EDL Capital have separated Russian shares, while Coatue Management has created a side-pocket for bets in private companies. UK regulators have been talking with retail funds about separating frozen Russian assets from core investments, according to a consultation document in March, to help new investors avoid exposure to such  assets and let existing holders redeem the rest of their investment.

The Russian side-pockets may be too toxic even for him, Rehman says, pointing to the legal complications that may be involved in their unwinding. It’s also unclear how they can be bought without violating sanctions, he said.

Investors like Rehman buy hard-to-sell assets at a deep discount and hope to turn a profit if those funds are liquidated at higher values. Profits can be handsome. Jared Herman, president of Hedgebay Securities that brokers in private and illiquid assets, said investors typically get 15% to 20% annual returns but in some cases profits can exceed 50% or fall to zero.

The process is tedious. Disposing off illiquid assets has always been a murky area of finance where patience is tested, deep research and connections are required and ugly litigations are frequent. “Most investors tell me that they get the direction right but what they almost always get wrong is the duration,” Herman said.

Rehman’s Madoff case is a classic example of how bad things can get.

In real dollars, the Madoff Ponzi scheme lost around $19 billion and trapped investors in numerous side-pockets and funds under liquidation. Some of them are still ongoing and billions of dollars have yet to be recovered.

The scale of the fraud was extraordinary. Madoff conned thousands of clients including seasoned investors, friends, charities and religious groups who gave him money that fueled fake super-sized returns, believing he ran $65 billion. It ended with him being sentenced to 150 years in jail, he and his wife attempting suicide and his son killing himself. Madoff died last year in prison at the age of 82.

Rehman’s Madoff-linked ordeal began with the purchase in 2014 of claims tied to a Guernsey-based fund called FIM Long-Invest. Started in 1997, FIM was a so-called fund-of-funds that collected money from investors and allocated the capital to several funds for diversified exposure. It had tens of millions of dollars invested in Kingate Global, which was tied to Bernard L Madoff Investment Securities, the Ponzi scheme that collapsed in December 2008.

In March 2010, FIM announced it would wind up, and appointed liquidators to sell the assets and distribute the cash generated among investors. Rehman, who bought some of those claims from FIM investors wanting out, is still waiting for that cash. Last year, he and at least one another investor, took matters into their own hands and sought the resignations of Anthony Sanderson and Paul Pybus, joint liquidators from Price Bailey Ltd.

“We appear to be trapped as shareholders in a voluntary liquidation,” they wrote in their complaint to the Guernsey Financial Services Commission, a copy of which was reviewed by Bloomberg. “The joint liquidators have awarded service contracts to one of their personal companies at an amount that represents poor value for money. Transfer rules, EGM notice periods, EGM requirements have all been interpreted and manipulated at the will of the joint liquidators to suit their personal interests and elongate the liquidation.”

Pybus and Sanderson resigned in April. They did not respond to several emails requesting comments, and neither did Price Bailey. Rehman confirmed the contents of the complaint. A spokeswoman for the Guernsey regulator declined to comment on the complaint, citing “strict confidentiality obligations.”

Even after the resignations of the joint liquidators, Rehman’s recovery depends on the outcome of Kingate’s liquidation, which itself has been running for 14 years.

“I am a patient and passive investor and this was a last resort given the dreadful treatment of shareholders and the serious concerns I have on how the liquidation has been conducted for many years,” Rehman said. “Although the liquidators have resigned, the questions we posed in February 2021 remain unanswered and are still cause for serious concern.”Most side-pockets are less complicated than the one Rehman is grappling with. The investment vehicles emerged from the depth of the financial crisis in 2008 after hedge funds got trapped in an avalanche of illiquid assets. Investors estimate that $200 billion to $360 billion were side-pocketed in 2008 — or as much as 20% of the industry then. While the vast majority of those side-pockets have been unwound, some complex liquidations remain, trapping billions of dollars.

Hedge funds have grown since then to manage more than $4 trillion and a repeat of 2008-like event would lock about $800 billion. To top that, more and more yield-hungry investors have migrated to bet on illiquid and private market assets amid historically low interest rates, creating a potential blind spot should funds start to face withdrawals as global markets and economies tank.

“Should we enter into a cycle of redemptions and liquidations, we may start to see more side-pockets and hard-to-value assets emerging from portfolios,” said Nicolas Roth, head of alternative assets at Geneva-based private bank Reyl & Cie, who has helped clients deal in side-pockets. They “can be the expression of some excesses in the system and deviation from mandates from managers.”

Investors Look to Hedge-Fund Playbook to Deal With Russia Assets

The niche sector of side-pockets has exploded over the years, with dozens of firms drawn to it by its rich pickings. Rehman is among the sector’s most-influential players.

He began his finance career as an equities trader at Goldman Sachs Group Inc. in 2001 after studying mathematics at the University of Cambridge. He worked on the Technology, Media and Telecom team at the firm and later focused on special-situations investing. Marshall Wace hired him two years later and made him a partner in 2005. Rehman, who is currently pursuing a PhD in quantum mechanics, left in 2009 to invest his own money in illiquid assets and fund liquidations.

FIM is not Rehman’s only Madoff-linked investment. He still holds bets tied to Kingate, Fairfield Sentry and Fairfield Sigma. Rehman has successfully realized gains in claims he bought tied to Thema International Fund Plc, the Irish investment fund that helped open the floodgates of European cash for Madoff’s firm in the early 1990s, as well as Hermes International Fund Ltd.

Some 2008-era liquidations are still ongoing, says Hedgebay’s Herman. These include a Harbinger Capital Partners side-pocket created to park a soured bet on a Vietnamese casino, Grand Ho Tram Strip, in which the firm invested more than $450 million, and a minority stake in a telecommunications company previously known as LightSquared into which it poured at least $2 billion. Side-pockets tied to Highland Capital Management and Bennelong Asset Management also remain.

“We transact in these things and people still have them and they still exist,” Herman said.

Eventually, many of the bets that turned illiquid and are sold to investors like Rehman in the secondary market may lead to handsome profits but the wait can be excruciatingly long.

Take Enron Corp. for example. Once the biggest U.S. energy trader, Houston-based Enron filed for bankruptcy in 2001. Its liquidation took more than a decade but its unsecured creditors got a 53% payback, or more than $21 billion in cash and stocks — triple the recovery estimated by the estate in charge of overseeing the process.

Some subordinated debt issued by Lehman Brothers before its collapse in 2008 could lead to a windfall of several hundred million pounds for Deutsche Bank AG and other distressed-debt investors. The notes were changing hands for next to nothing more than five years ago. The wait continues, however.

For buyers of such distressed assets, a lot more may be heading their way.

“The lesson for many hedge fund investors in 2008 was ‘get the hell out first,’” said Andrew Beer, founder of New York-based Dynamic Beta Investments. “Early movers got cash and late movers got side-pockets.  Given the environment over the past few years, I suspect we’ll see a repeat of the side-pocket nightmare of 2008.”