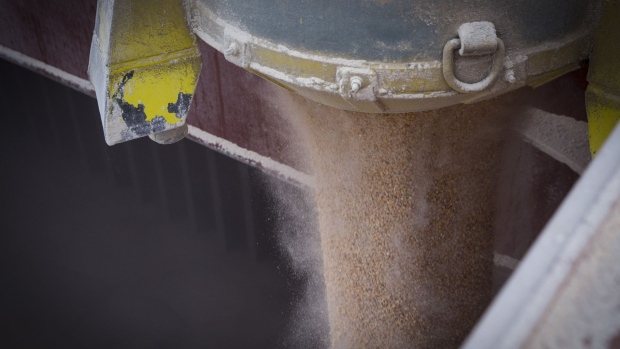 Corn is loaded into a bulk carrier at the United Grain Corp. terminal at the Port of Vancouver in Vancouver, Washington, U.S., on Thursday, Feb. 7, 2019. Ports in the Pacific Northwest have invested hundreds of millions of dollars to expand their ability to ship America's agricultural riches east to an increasingly hungry Asia. Now, amid Trump's trade war with China and no deal with Japan, port officials are concerned where growth will come from if Asia turns elsewhere for crops. Photographer: Moriah Ratner/Bloomberg , Bloomberg

(Bloomberg) -- Hedge funds plowed money into bets that the commodities rally of 2021 still has further to run, snapping three straight weeks of reductions.

Net-long positions on a basket of 20 commodities rose by 8.3% in the week ended Tuesday, according to U.S. Commodity Futures Trade Commission data compiled by Bloomberg. Investors added wagers on further price gains for raw materials including crude oil, natural gas, corn and copper, while cutting those for platinum and soybeans.

The best commodity rally since 2016 has lost some of its steam over the past few weeks amid speculation the Federal Reserve may soon start to scale back its massive bond purchases to fight inflation, while the spread of the Delta variant of Covid-19 has raised concerns that demand might not remain so strong moving forward. Still, tightening supplies of some raw materials have helped sustain prices close to multi-year highs.

The Bloomberg Commodity Spot Index, which tracks 23 raw materials, gained 1.5% in July and is near the highest level since 2011.