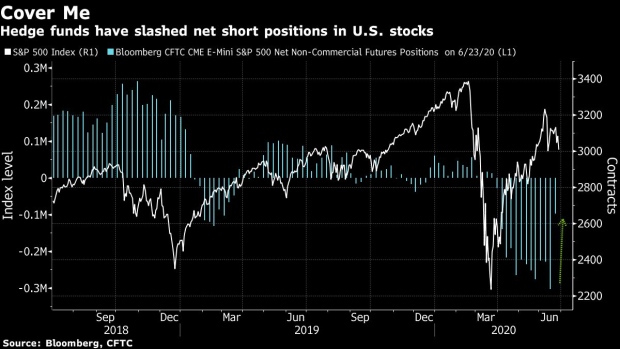 Traffic moves through Times Square in New York, U.S., on Thursday, June 11, 2020. New York streets got a little more congested this week as the city entered Phase 1 of its re-opening from the coronavirus-imposed lockdown. Photographer: Jeenah Moon/Bloomberg , Bloomberg

(Bloomberg) -- Fast-money hedge funds are rushing to cover their bearish U.S. stock bets even as the equity rally threatens to break down.

Speculative investors bought a net 206,227 S&P 500 Index E-mini contracts in the week to June 23, the most since 2007, according to the latest Commodity Futures Trading Commission data. Net short positions in the contracts were at their highest in almost a decade as the U.S. equity rebound pushed the benchmark back toward record territory.

The surge in short-covering comes as traders wrestle with what to do after a pause in one of the most unloved rallies in recent financial history. The S&P 500 had climbed more that 40% from its late-March low to early June, despite concerns that investors were over-optimistic about the pace of the U.S. economic recovery.

U.S. stocks fell almost 3% last week as the coronavirus spread showed no signs of slowing down.

Other measures of trader positioning also point to an increase in short-covering activity.

Short interest as a percentage of shares outstanding in the $266 billion SPDR S&P 500 ETF Trust had fallen to 4.9% Friday from 6.7% at the end of May, according to data from IHS Markit.

Meanwhile, the beta of the Hedge Fund Research Macro/CTA Index -- which tracks funds synonymous with trend-following quant strategies -- to the S&P 500, is back above zero for the first time since March. That suggests CTA funds have been boosting their exposure to U.S. equities and closing short positions.