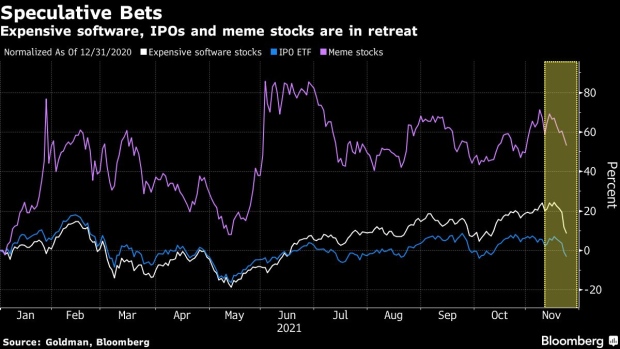 (Bloomberg) -- A plunge in dizzily priced software and internet stocks is setting off a quick exodus among professional speculators who were counting on the the group to salvage their year.

Hedge funds stepped up selling as the rout gathered pace Monday, bailing at the fastest pace in more than two months, according to Goldman Sachs Group Inc.’s prime broker. One particularly stretched category, software developers such as Zoom Video Communications Inc. and Asana Inc. that have enterprise value exceeding eight times sales, accounted for 90% of the total share disposal in that sector.

How professional investors ended up owning so many super-speculative names is a matter of much discussion on Wall Street. Many of the companies share space with the stay-at-home trade, and could be viewed as bets against the economy, although hedge funds have also been upping bets on reopening stocks. Some money managers may have plowed into them in a bid for above-market returns at the end of a lackluster 2021 relative to benchmarks, according to Todd Sandoz, co-head of global equities at Barclays Plc.

“There was a desire to kind of keep up with the broader index. And there was definitely a view that those are higher-beta assets and that’s a way to try and play a little bit of catch-up,” Sandoz said by phone. “When the market turns and it’s not working, you need to take risks down. And everybody’s in those names, so you also probably have a view to try to cut things faster.”

It adds up to a moment of reckoning for those who had piled into bets to reap gains from a secular boom in spending on everything from cloud computing to cyber security. Last month, hedge funds raised their industry exposure to a five-year high, according to data compiled by Goldman’s prime brokerage. Meanwhile, traders poured a record amount of money into the iShares Expanded Tech-Software Sector ETF (IGV).

While the bright long-term outlook for the sector remains intact, elevated multiples means sentiment can quickly flip when rising interest rates create pressure on valuations.  Zoom, a video conferencing company, slumped 15% Tuesday after reporting a smaller-than-projected number of large customers. Asana, due to report results next week, dropped as much as 8%.

The Goldman basket of highly priced software shares dropped almost 4%. Down 14% over five days, the group is poised for the worst stretch of losses since March.

“Once these stocks that are very speculative start to drop, there’s no real valuation support. They’re more conceptual,” Chris Grisanti, chief equity strategist at MAI Capital Management, said by phone. “So once the sentiment changes, there’s very little to support them until they’ve fallen off a lot. We’ve started to see it.”

There are signs that retail traders are bailing out of some of this year’s tech darlings. Tesla Inc., which held up during Monday’s carnage, dropped more than 5% Tuesday and ranked as the second-most active stocks on Fidelity’s platform. Newly listed Rivian Automotive Inc. and Nvidia Corp. were also among the most active. A separate Goldman basket tracking the most popular meme stocks slumped 4%.

Pinpointing the exact trigger for the selloff is not easy. While many cited a spike in Treasury yields as the culprit, others pointed to a flood of share offerings that have overwhelmed the market. The Renaissance IPO ETF (IPO), tracking recent initial offerings, tumbled 3% to a four-month low.

“The amount of paper that has come over the last couple of weeks has been extremely large,” said Sandoz at Barclays. “So in terms of what’s kind of turning the tide, there’s just been a little bit of indigestion and, effectively, supply that’s coming to the market. When you start to see a few of these things not working and people are long, that kind of cascades across that space.”