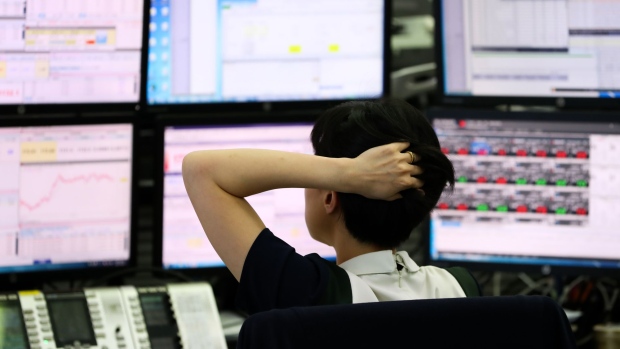 A foreign currency dealer looks at a monitor in a dealing room of KEB Hana Bank in Seoul, South Korea, on Monday, Sept. 4, 2017. Asian stocks fell as investors turned to haven assets after the dictatorship tested a nuclear bomb on Sunday, sending the yen, gold and Treasury futures higher. Photographer: SeongJoon Cho/Bloomberg , Bloomberg

(Bloomberg) -- Korea is imposing punitive penalties, including at least a year in jail, on investors who illegally sell stocks short. The stricter punishments come as Seoul prepares to lift a pandemic-imposed ban on trading borrowed shares.

Naked short-sellers, or investors who sell stocks they haven’t even borrowed, will be punished by at least a year’s jail term or fined up to five times their profit from the trade, according to a statement from the Financial Services Commission. Currently, naked short selling, which has always been illegal in Korea, is punished by lower fines.

Fearing volatile markets, Korea imposed a broad short-selling ban in March as the coronavirus outbreak worsened, then extended it in August for another six months. Korea remains one of the few countries globally that continues to bar such a practice.

“Regulators seem to be trying to improve Korea’s current short-selling system before the ban on it is lifted next year,” said Han Byung-hwa, analyst at Seoul-based Eugene Investment & Securities.

Seoul is now considering a partial lift of the ban in March and even plans on giving retail investors the privilege of trading borrowed stocks to put them on a level playing field with institutional investors, according to Financial Supervisory Service, the top watchdog, two months ago.

The FSC said in its Wednesday statement that it is becoming stricter about naked short-selling to “boost trust” in the country’s stock market, adding however that legal short-selling remains a positive tool in making markets more efficient.

The new punishments will be enacted in a few months, after the country’s president and the cabinet approve them. All investors that sell stocks short will have to keep their records on trades for five years so that regulators can check at any time that the trades haven’t been illegal.