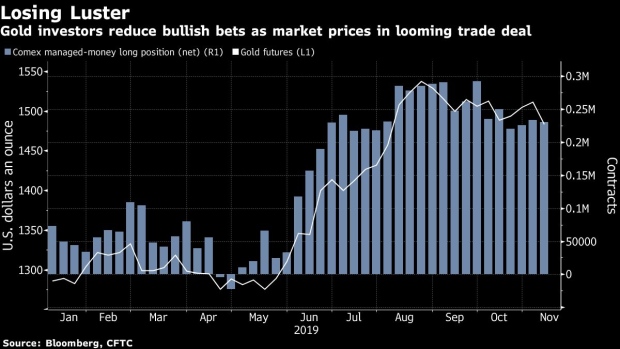 (Bloomberg) -- Glimmers of global optimism are casting a pall over gold.

Recent geopolitical and economic concerns had underpinned demand for the metal as a haven asset -- until this week. That was reversed by less-negative signs for the global economy, a strengthening dollar and, most importantly, new progress in global trade talks.

“It’s been sentiment around the U.S.-China trade relationship that’s mostly driven the price of gold,” Kristina Hooper, chief global market strategist at Invesco Ltd., said in an interview. “That sentiment has improved, so there hasn’t been as much of a need for gold in recent weeks. But as we know that can change on a dime.”

And change it did. A day after a Chinese official said the world’s two largest nations had agreed to remove “tariffs in phases as progress is made,” President Donald Trump said Friday that the U.S hadn’t agreed to anything. That sent prices momentarily upward and seeded new doubts on whether a deal will be signed any time soon.

Still, the overall sentiment has been negative for gold. In the week ended Nov. 5, hedge funds boosted their gold short position by 15% to 31,111 futures and options, the highest since June, according to U.S. Commodity Futures Trading Commission data published Friday. That trimmed the net-long position, which measures the difference between bets on a price increase and wagers on a decline, to the lowest in two weeks.

After a day of price swings on Friday, gold futures for December delivery settled 3.2% lower at $1,462.90 an ounce on the Comex in New York, the worst weekly loss for a most-active contract since May 2017. On Thursday, prices broke below their 100-day moving average for the first time since May, a key level that could indicate further downside.

Friday’s gold price volatility and the first weekly slump in a month provide evidence the market is aware that headlines can be fickle, said Nicky Shiels, metals strategist at Bank of Nova Scotia, dubbing the phenomenon “headline roulette.” Now, while gold prices should maintain in an overall sideways trajectory, they could shift into a lower range given their breakthrough technical levels, she said.

“Risk has been pushed out,” Shiels said. “There’s some glimmer of hope, and that’s putting your havens on the back foot for now.”