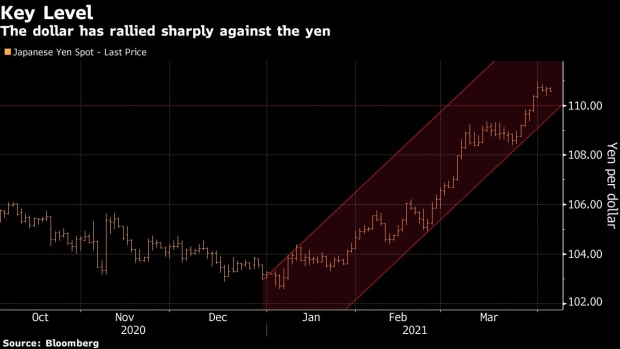 In just over a month, futures and options speculators have flipped from a net long yen position to be at their most bearish in over two years, according to data from the Commodity Futures Trading Commission. The velocity of the reversal partly explains the haven currency’s slide last week when it breached the 110 level against the dollar.

Strategists see the yen’s decline extending -- a reversal of earlier calls for it to strengthen to 100 -- as rising U.S. Treasury yields and stronger-than-expected economic data turbocharge the global reflation trade. It is the worst-performing Group-of-10 currency this year after falling 6.6% against the dollar.

Leveraged funds increased their net yen shorts to 48,510 contracts, the most since January 2019, for the week through March 30, according to CFTC data. They were net long in mid February. Asset managers have also cut long positions.

The yen, which fell to a one-year low last week, traded at 110.57 against the dollar at 11:50 a.m. in Tokyo Monday. The currency’s decline has tracked the selloff in Treasuries, where yields for the 10-year benchmark have soared around 80 basis points this year.

Australia & New Zealand Banking Group Ltd. sees the yen falling another 3 to 4% against a G-10 currency basket. RBC Capital Markets predict climbing U.S. yields may prove “toxic” for the currency and could push it through the 112 level, a view shared by Mizuho Securities Co.

To be sure, not everyone is predicting the currency’s continued decline.

The yen has become “quite oversold and under-loved, so it’s getting ripe for a bounce,” said Matt Maley, chief market strategist at Miller Tabak + Co. “With hedge funds short positions so large, there’s a risk that they’ll get squeezed.”

The yen’s decline is coinciding with the euro’s.

Hedge funds extended net shorts on the common currency to the most since July as the eurozone struggles with vaccination rollouts and renewed lockdowns.

“With France going back into lockdown and Italy and Germany extending partial lockdowns, the weak eurozone outlook is carrying over into Q2,” Win Thin, global head of currency strategy at Brown Brothers Harriman & Co., wrote in a note. The euro “is still on track to test the November low near $1.1605.”