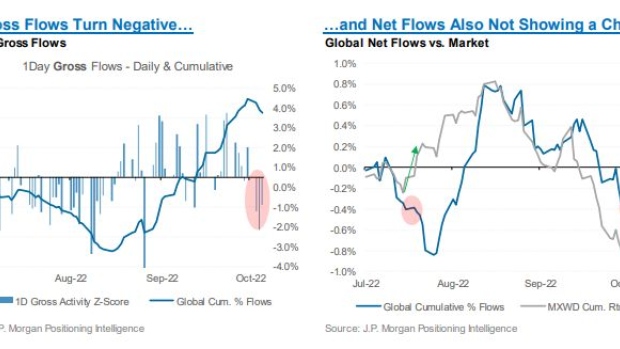 The New York Stock Exchange (NYSE) in New York, US, on Friday, Aug. 26, 2022. Stocks sank as Jerome Powell gave a short and clear message that rates will stay high for some time, pushing back against the idea of a Federal Reserve pivot that could complicate its war against inflation. Photographer: Michael Nagle/Bloomberg , Bloomberg

(Bloomberg) -- The fast money refused to join the crowd betting the Federal Reserve was about to make a friendly shift in monetary policy. It proved a prescient bet after Friday’s jobs report.

The S&P 500 dropped more 1.5% at the open after data showed the American labor market remains resilient in the face of rising interest rates. That’s good news for hedge funds that, while stocks were staging the biggest two-day rally since 2020 earlier this week, reduced holdings on both the long and short side of their books, according to data compiled by JPMorgan Chase & Co.’s prime broker unit.

After a brutal third quarter, stocks rallied to start the week on growing speculation that the Fed’s efforts to combat inflation will soon take hold in the economy, allowing the central bank to slow the pace of future rate increases. The hiring data quickly quelled that talk.

“This discussion earlier this week was surreal to me around the Fed pivot,” said Rick Rieder, chief investment officer for global fixed income at BlackRock Inc., said on Bloomberg TV. “There is no pivot. The Fed has got to keep going.”

The skeptics had history on their side ahead of Friday’s payrolls data. The S&P 500 has fallen in all but two times this year on the day the report was released.

American employers added 263,000 jobs in September, more than the median forecast of economists in a Bloomberg survey. The report may give the Fed room to keep raising rates as it battles inflation. Data on consumer prices due next week will also weigh heavily in that calculus.

Recent bond buying by the Bank of England and a dovish surprise at Australia’s central bank had sparked speculation that monetary officials will have to weigh their hawkish impulse against risks to economic and financial stability. Even with Fed officials beating back notions that a policy pivot is in the offing, the S&P 500 jumped more than 4% in the four days leading up to the jobs data.

Hedge funds aren’t buying. Those tracked by JPMorgan kept their net equity exposure near the lowest level since the 2020 pandemic crash.

The trepidation echoes the pattern in the summer, when the group was initially reluctant to embrace the equity rally. With the market’s outlook murky, many investors may be waiting for the earnings season, slated to kick off next week, to get more clarity in 2022’s bruising stock market.

“This pattern is similar to what we saw in the one-week rally from the June lows, as well as what we saw in July when markets started to rebound, but hedge funds remained cautious,” JPMorgan’s team including John Schlegel wrote in a note. “It could once again take more time (and improving data) for investors to be willing to make more of a positive shift in their portfolios.”