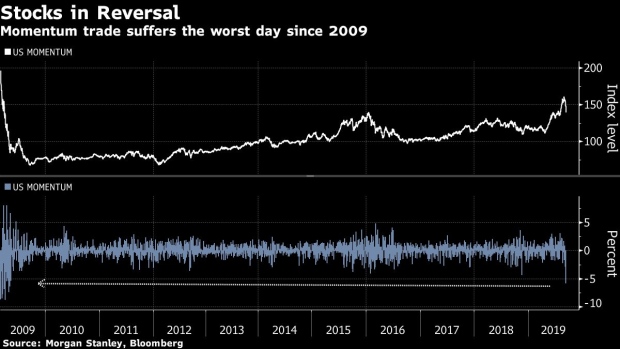 (Bloomberg) -- A hedge-fund favorite is rapidly losing ground in the stock market just as one of the industry’s least-loved sectors picks up.

Growth stocks, generally companies that are seeing rapid profit increases, have dropped in seven of the past eight days as measured by Bloomberg’s Pure Growth Portfolio. Meanwhile, a similar measure of value shares, those with the cheapest valuations, are staging a big comeback. The turnaround is so extreme that a Morgan Stanley strategy that’s long the best-performing stocks and short the worst dropped 5.9% as of 1:30 p.m. in New York, poised for the biggest loss since May 2009.

The divergence will be especially painful for hedge funds, which have loaded up on high-flying companies while eschewing equities with subpar valuations. Exposure to growth stocks among long-short hedge funds has increased to the highest since at least 2016 as ownership of value hovers near multi-year lows, according to prime brokerage data from Goldman Sachs.

It’s hard to pinpoint the exact catalyst behind the rotation, but one reason cited by Wall Street strategists is the bottoming in Treasury yields. As the theory goes, fears over a recession have driven yields toward record lows this year and equity investors watching the signal have flocked to growth and dividend stocks for safety. Now that yields started rebounding last week, those safety trades are reversing.

The movement in yields “drove such an outside performance bleed for many in the U.S. equities space,” said Charlie McElligott, a cross-asset strategist at Nomura. By his count, today is shaping up to be the worst since at least 2010 for investors who are long momentum and short value.

The S&P 500 Index fluctuated between small gains and losses Monday after two consecutive weekly advances pushed the benchmark toward 3,000. Energy and financial shares, among the cheapest in the S&P 500, each rose more than 1% while software makers and drugmakers, whose growth is seen resilient amid an economic deceleration, were among the biggest losers. Dividend stocks such as utilities and real estate also fell, extending their underperformance this month.

“Safety panic unwind continues, which is leading to a sharp decline in classic defensives and software,” said Dennis DeBusschere, head of portfolio strategy at Evercore ISI. “A long term rotation into value is not ahead of us. That won’t come till fiscal stimulus becomes more likely, but the potential for a sharp unwind of extended positioning is elevated.”

--With assistance from Luke Kawa.

To contact the editors responsible for this story: Brad Olesen at bolesen3@bloomberg.net, Brendan Walsh, Rita Nazareth