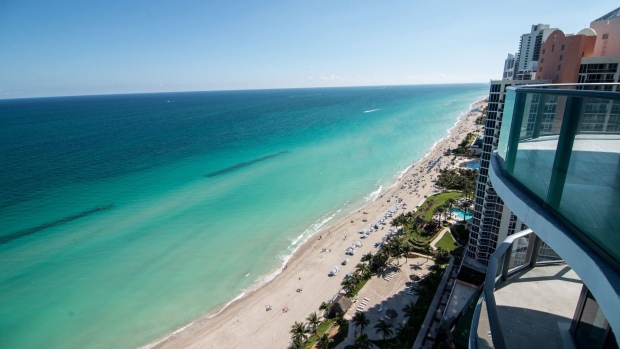 Views of the ocean and beach are seen from the Regalia luxury condominium in Sunny Isles Beach, Florida, U.S. , Bloomberg

(Bloomberg) -- Hedge funds are planning to expand their presence in Florida, adding to a migratory trend as wealthy residents of northern states face the threat of higher taxes.

Chicago-based Balyasny Asset Management, with about $8 billion of assets, intends to open an outpost in Miami, according to people familiar with the matter, and Bluecrest Capital Management, which has offices in New York, recently opened a Miami office that now accommodates about 10 portfolio managers. Paul Singer’s Elliott Management Corp. is also contemplating opening an office in Florida, other people said.

The moves to Florida, which has no state income tax, come as locales with the highest number of hedge funds weigh tax increases on the rich. Last week, New Jersey adopted a millionaires tax, and a ballot measure in Illinois calls for raising taxes on the wealthy. New York Governor Andrew Cuomo has said such a tax could be possible if the U.S. government fails to step in with aid, and Connecticut’s legislature also has discussed a tax hike.

“Every firm like Elliott is in the process of evaluating choices in how and where they work, including working from home and opening additional offices, but Elliott has not made any decisions,” said Stephen Spruiell, a spokesman for the New York-based firm.

David Goodboy, head of the Palm Beach Hedge Fund Association, whose members also include asset managers and investment advisers, said he fielded two or three inquiries a week this summer from people thinking of decamping to Florida, compared with the usual one or two a month during the season. Ninety percent are from Manhattan and Greenwich, Connecticut, he said, adding that he’s spoken to people interested in moving to Palm Beach, Miami and Boca Raton.

Verition Fund Management set up an office in Boca Raton for a couple of portfolio managers two years ago and expects more people will choose to migrate from Connecticut and New York, according to a person familiar with the Greenwich-based firm. ExodusPoint Capital Management opened a small office in North Palm Beach last year.

Florida’s favorable tax laws have drawn high-net-worth individuals for years, and the Republican-backed 2017 law that capped deductions for state and local taxes on federal returns may have provided even more incentive. People selling real estate in places like Miami and Palm Beach have been deluged by offers, with purchase contracts in South Florida surging at all price points.

David Tepper was among the earliest movers in the hedge fund industry. He decamped to Miami from New Jersey in 2015, and relocated his Appaloosa Management there the following year.

Miami is doing its part to woo new residents. In its new “Follow the Sun” campaign, the city is offering companies as much as $50,000 to relocate or expand offices downtown and employ at least 10 high-wage workers.