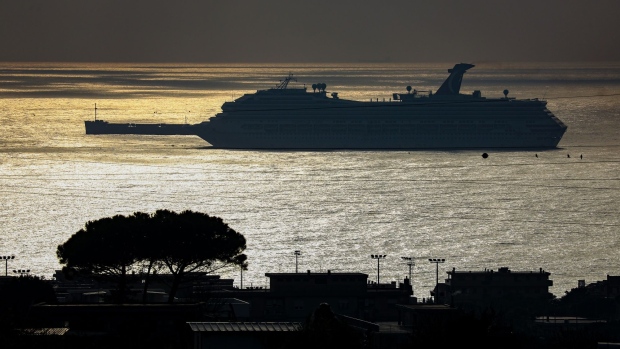 The Carnival Valor cruise ship, operated by Carnival Corp., silhouetted while docked at the port of Civitavecchia near Rome, Italy, on Monday, Feb. 22, 2021. The cruise industrywide stock surge has been all the more extraordinary because the companies have had almost no paying customers for the past year, and they’ve had to assume piles of high-interest debt just to get by. Photographer: Alessia Pierdomenico/Bloomberg , Bloomberg

(Bloomberg) -- As the world went into lockdown last year, hedge funds stuck by the companies that suffered the most. It paid off.

Some of the industry’s biggest names loaded up on companies that were pummeled as Covid-19 prompted government lockdowns and social-distancing guidelines, according to hedge fund consultant PivotalPath. They’re the hotels, casinos, cruise lines, restaurant chains and theme park companies that people are longing to frequent again as the pandemic recedes in the U.S.

“Despite popular belief that hedge funds all made money shifting into tech and remote-environment stocks, most hedge funds actually made money because they stayed in the beaten-down names, or they ramped up those investments,” said PivotalPath Chief Executive Officer Jon Caplis. “They saw that a lot of the economy was going to come back.”

While some funds bought up stocks that boomed as workers stayed at home -- like Zoom Video Communications Inc. and Peloton Interactive Inc. -- those wagers were on the margin, Caplis said. And, they were placed early in the pandemic -- even in February, before stocks plunged as major cities ground to a halt in March, he said.

Those bets helped offset losses from the selloff. But once technology stocks jumped in April, hedge funds pivoted into the hammered “Social Distance Loser” stocks -- as Caplis calls them -- or increased their existing positions in them, he said.

Dan Sundheim’s D1 Capital amped up its long-held stake in casino-operator Las Vegas Sands Corp. by 90% in the second quarter of last year, according to regulatory filings. While the firm reduced its holding, it still owned the stock as of March 31, public filings show. Las Vegas Sands gained more than 50% since April 1, 2020 through then.

Viking Global Investors opened a position in Olive Garden-owner, Darden Restaurants, in the second quarter of 2020 before selling them in the first quarter of this year. Shares of Darden more than doubled between April 1, 2020 to March 31, 2021, while Seaworld Entertainment Inc. -- bought by Candlestick Capital in the same period -- more than quintupled in that time.

“Hedge funds are really good at picking undervalued names -- and they did it again,” Caplis said.