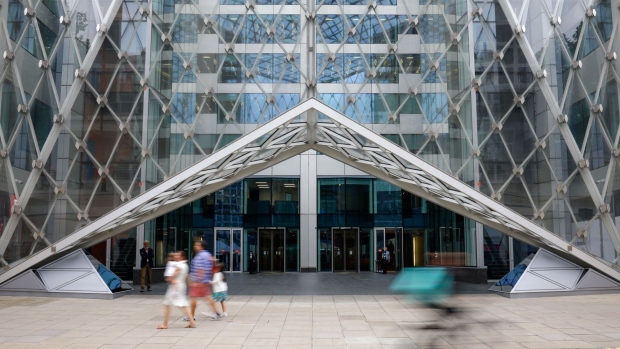 The office building at 55 Baker Street, housing the offices of Brevan Howard Asset Management LP, in London, U.K., on Monday, Aug. 23, 2021. Famed investment firm Brevan Howard, which as recently as mid-2019 was struggling to stem an unprecedented client exodus, shut its flagship fund to investors earlier this year. , Bloomberg

(Bloomberg) -- Millennium Management and Brevan Howard Asset Management want to penalize money managers who agree to join the firms but later change their minds, in an unusual step to protect themselves from the competition for talent in the hedge fund industry.

The two firms are asking new hires to agree to terms in their employment contract that can force them to pay damages if they do not start work as planned, according to people with knowledge of the matter. Conversely, the trader would get paid if the hedge funds decide to pull the job offer, the people said asking not to be identified because the information is private.

The move, sparked by several traders backing out from jobs they had accepted for sweeter deals elsewhere, shows how far some hedge funds will go to secure a pipeline of top staff as money floods into certain corners of the industry.

Funds often have to wait six to 18 months before a new portfolio manager finishes their non-compete clause with their previous employer, according to Russell Clarke, partner at Figtree Search in London. Should a new joiner not start then “new investments and the opportunity set goes on hold,” he said.

Clauses fining new joiners who back out are typically reserved for the most expensive hires with bespoke contracts, according to Clarke. “It’s not new but rarely used.”

Brevan Howard and Millennium Management are among investment firms such as Citadel, Eisler Capital and ExodusPoint Capital Management constantly looking to recruit traders as investors migrate to multi-manager hedge funds in search of more reliable returns than single-strategy funds can offer.

Multi-strategy firms have gathered $15 billion in inflows this year when the hedge-fund industry has seen outflows of more than $63 billion, according to eVestment data. Brevan Howard alone has more the quadrupled its assets to over $28 billion from a trough in late 2018, while Millennium runs $59 billion.

To deploy such assets and keep growing, hedge funds need to expand the strategies they run -- which means hiring staff from each other, as well as banks.

Such a stampede for talent has led to traders weighing different options, signing multiple contracts and then switching sides to go to the highest bidder or players offering something extra, the people familiar said.

Canice Hogan, CEO of executive recruitment firm Shadowhound, said applicants sometimes get two or three offers on the table before signing. “My advice is to tell the hiring firm that you’re considering a number of options and once you have all the information you will make the decision,” he said.

Such fierce competition of experienced traders has led to many funds starting to pay tens of millions of dollars in sign-on bonuses to sweeten their offers, a practice that was until recently restricted to Wall Street banks, the people said.

Powering their strategy to attract traders is the “pass through” fee structure that’s rapidly replacing standard management fees at major hedge funds. These charges can cover everything from boosting pay to hiring, covering rent and even entertainment. While management fees were traditionally set at an annual rate of 2% of assets, the pass-through charge isn’t set and can climb to 10% or more.

Brevan Howard is raising money in a new pass-through share class in its flagship hedge fund, which is up 19% through October, Bloomberg has previously reported.

In some cases, the battle for talent has threatened to spill over into the courtroom. Late last year, Balyasny Asset Management had to put a temporary ban on hiring from rival Citadel’s Global Fixed Income business in a settlement. Several former Citadel employees now at Balyasny were accused of being in breach of their contracts, including non-compete and non-solicitation agreements.

Millennium and Brevan Howard’s teeing up of fines take the competition for talent a step further, aiming to ward off competing offers from rivals once a trader signs up.

“This is a clever idea, it’s really going to get people super committed to them,” said Michael Nelson, managing director at recruitment firm Quest Group in New York. “It’s a very aggressive tactic but it’s one way to assure yourself you’re going to get the hire. We’ve seen similar stuff in New York at the banks in regards to claw back in compensation.”

Some questioned if the strategy will hold under a legal challenge. The banking industry offers some precedence.

In one example, a Credit Suisse Group AG executive signed an offer letter from Jefferies in 2016 before deciding to stay put. This led to Jefferies asking the Financial Industry Regulatory Authority to enforce a liquidated damages provision in the offer letter that required him to pay the brokerage $1 million. The executive’s challenge to the decision was later denied by courts in the US.