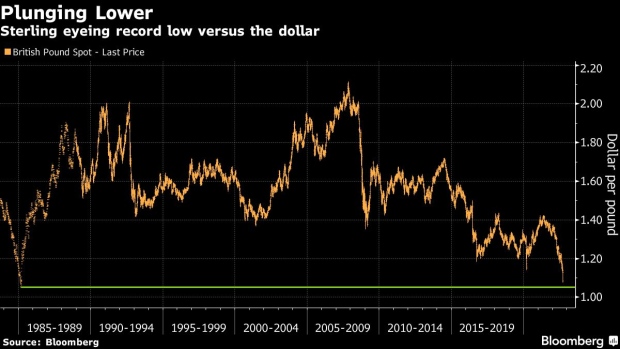 A cash tray holding British pound banknotes and coins in a shop in Barking, UK, on Tuesday, Sept. 13, 2022. As the UK enters a period of public mourning after the death of Queen Elizabeth II, data releases are likely to show a temporary reprieve in inflation and a jump in wage growth. Photographer: Chris Ratcliffe/Bloomberg , Bloomberg

Leveraged investors added a net 13,488 long contracts during the week to Sept. 20, the most since March, data from the Commodity Futures Trading Commission show. The bets came just before Liz Truss’s new government unveiled the most sweeping tax cuts since 1972, triggering a slide in the currency to a record versus the dollar on wagers the stimulus will balloon the UK’s debt pile and supercharge inflation.

Hedge funds might have increased long pound bets as “a bit of covering or position squaring” heading into the Bank of England’s policy meeting last week, said Viraj Patel, a strategist at Vanda Research. “But either way, there will be a few hedge fund longs that were trying to fade the sharp decline we’ve seen in GBP/USD year-to-date getting caught offside.”

The pound fell to as low as $1.0350 on Monday after Chancellor of the Exchequer Kwasi Kwarteng last week outlined tax cuts and spending plans. The nation’s Debt Management Office boosted its bond sales by £62.4 billion ($66.6 billion) this fiscal year to fund the stimulus, more than the estimated £60 billion increase expected by banks surveyed by Bloomberg.

The massive fiscal stimulus comes at a time when the BOE is already struggling to rein in inflation, which is near a 40-year high. The chance of the pound touching parity in 2022 rose to about 60% on Monday, up from 32% on Friday.

Markets are also expecting turbulence, with three-month implied volatility for the pound-dollar pair surging by 4.31 percentage points to 20.05% Monday. That’s approaching the high of 20.62% reached during the 2020 pandemic meltdown.

The pound “is vulnerable to further falls which could increase the likelihood of FX intervention by the UK Treasury,” Carol Kong, strategist at Commonwealth Bank of Australia in Sydney, wrote in a research note. “GBP will likely be driven this week by comments from elected officials that either calm or exacerbate concerns about the UK’s budget position rather than comments from BOE officials.”

(Updates to add quote from strategist in last paragraph)