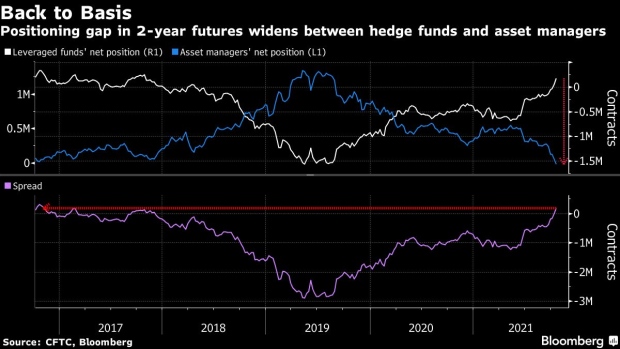 (Bloomberg) -- Hedge funds are piling back into a trade involving U.S. Treasury futures as surging expectations for Federal Reserve rate increases create dislocations in the market, particularly for two-year notes.

The Treasury basis trade involves pairing a position in futures with an opposite position in the underlying note or bond, and futures positioning data from the Commodity Futures Trading Commission suggest it’s having a moment. The trade makes sense because the increasing threat of Fed rate hikes last week caused a surge in two-year yields that disrupted the cash-futures relationship.

As interest-rate swaps repriced the Fed’s path to two hikes next year, compared with one a month ago, interest in being short the two-year note inflated its value relative to futures. The relative cheapening in futures apparently enticed hedge funds to enter into short basis trades, in which they’re long futures and short cash.

Hedge funds last week extended their net long in two-year note futures to the most since October 2017, the CFTC data show. Meanwhile, asset managers cut their net long position. The positioning spread reached the widest since 2016.

The rate at which short positions were established in two-year Treasuries last week was reflected in the high cost of borrowing the newest one. While the cost eased by the end of the week, the newest notes “are trading deeply special in repo markets, and the specialness is expected to persist through the end of November,” Deutsche Bank strategist Steven Zeng said in an Oct. 22 report.

Extraordinary demand for the newest two-year notes made them “a potential candidate for investors to be short against TU futures and likely why the issue has been funding special in repo as of late,” Barclays strategists Anshul Pradhan and Andres Mok said in an Oct. 21 note.

Past episodes involving hedge funds and the basis trade ended in tears, notably in 2020, but this one has been fairly orderly so far. The FRA/OIS spread, a key gauge of banking-sector risk that moved 70 basis points during the first quarter of 2020, has remained within a three-basis-point range over the past month.