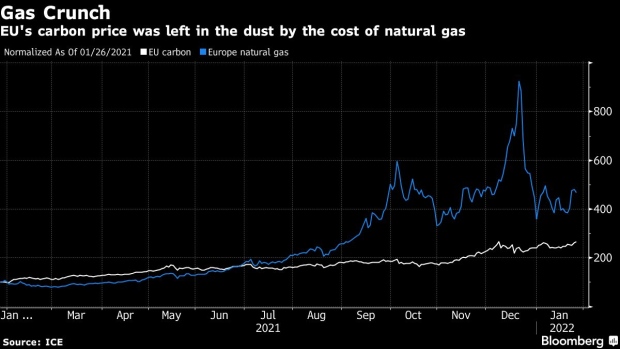 Vapor rises from the cooling tower and chimneys of the Belchatow coal powered power plant, operated by PGE SA, in Belchatow, Poland, on Thursday, July 8, 2021. PGE, which apart from being the operator of Europe’s largest lignite-fired power plant, is also the biggest owner of onshore wind parks in Poland. , Bloomberg

(Bloomberg) -- The European Union’s carbon price gained nearly 150% last year to a record, and some hedge funds profiting from the surge say that level will be smashed in 2022.

Bullish bets from Andurand Capital Management LLP, Northlander Commodity Advisors LLP and Clean Energy Transition LLP see permits blowing past 100 euros, about 13% higher than Wednesday’s close, as nations burn more coal to keep the lights on amid soaring prices for natural gas, which also is used to make electricity. The forecasts were made before Russian military moves near Ukraine stoked geopolitical tensions and heightened concerns about gas supplies.

It’s a confounding moment for Europe’s cap-and-trade system, which puts a price on carbon emissions from about 10,000 power plants and industrial installations. The system is working as intended by adding to the costs of using coal. But Europe has been grappling with an energy crunch over the past year as natural gas quadrupled amid tight supply. The shortage is so acute that even with higher carbon prices, it’s still cheaper to burn coal and pay for pollution permits.

“We’re still very much in a fundamental shortage of carbon emission permits between now and 2030,” said Ulf Ek, chief investment officer at Northlander, where carbon bets likewise led a nearly 150% gain for the fund last year. “Prices continue to have to go higher in order to bridge that gap between supply and demand.”

Carbon futures have risen almost 10% in January, a subdued reaction in Ek’s view. That indicates the market likely expects some heavy polluters to shut down rather than pay more for the energy needed to keep operating, he said.

Still, any dip in industrial production will be eclipsed by higher emissions from coal plants, he said, potentially pushing carbon permits to 140 euros, nearly 75% higher than the start of the year.

That record price surely would funnel more of the investments in power plants toward those using cleaner fuels such as gas, said Casey Dwyer, portfolio manager at Andurand, where bets on carbon helped drive an 87% gain for one fund last year. Andurand manages about $950 million.

“What is the carbon price that incentivizes new gas construction over coal? That is 120 euros in our numbers,” Dwyer said. In his view, carbon could reach that level this year -- a close to 50% gain from 2021.

That long-term capacity of the market to encourage decarbonization is key to its future as a pillar of climate policy. Politicians in Poland and Hungary, among others, want government intervention to help stem the price spikes amid rampant energy inflation, but those calls have gained little traction in the European Commission.

“At the end of the day, if they want to get re-elected, they actually need to care about climate,” Dwyer said.

Some new rules may be coming. Peter Liese, the lawmaker overseeing the market’s reform, is working on measures to prevent manipulation, though they currently don’t include steps to limit costs. A preliminary report from the EU market watchdog didn’t find any evidence of abuse.

Investor bets on surging prices are helping juice returns, but not everyone sees a rerun of last year. Analysts at BloombergNEF expect carbon to average about 80 euros, and Morgan Stanley says carbon is set to rise above 100 euros only by 2024. In the short term, prices could decline because of seasonality, political pressure and profit taking, according to a Jan. 25 note by bank analysts.

One of the biggest risks to carbon at the moment may be the milder winter across the continent that’s reducing the need to burn fossil fuels, said Per Lekander, managing partner at Clean Energy Transition.

Even so, carbon will resume its upward trajectory because Europe must reduce emissions to reach ambitious climate goals, he said. Lekander forecasts a price between 100 euros and 150 euros.

“I’m bracing for a tactical setback after a very long run, and then we’re back on track again,” he said. “I would never short EU carbon allowances.”