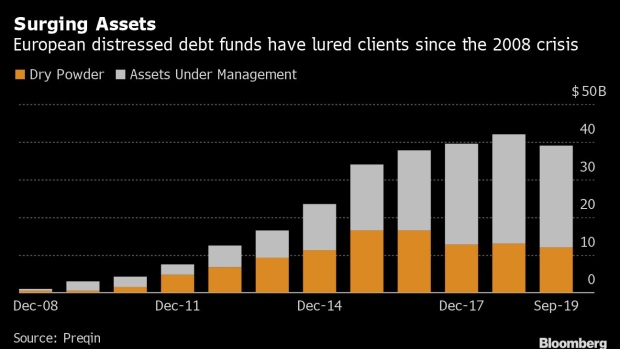 Hedge funds and investment firms are scouting for distressed debt specialists as they raise large war chests to snap up bargains amid the downturn triggered by the coronavirus pandemic.

“There’s so much money being raised, it requires more people on the ground,” said Louisa Watt, a lawyer who advises distressed debt funds as a partner at Brown Rudnick LLP.

This is the busiest her clients have been in years, she added. One of the hedge funds she works with has done more trades in the last six weeks than they did in the last two years combined.

Firms including Oaktree Capital Group LLC, Highbridge Capital Management and Chenavari Investment Managers are seeking to raise a record $68 billion to target companies that have been punished by the global economic shutdown, according to data compiled by Preqin.

For many funds, it’s been a long wait for distressed situations to arise on the current scale. The ultra-low interest rates employed by many countries to ease economies out of the last financial crisis helped many struggling companies to stay afloat.

With markets so benign, many firms had scaled back activity and reduced staff numbers. Now that’s starting to change.

Activist investor Elliott hired Praveen Pillai, a former director in Angelo Gordon’s distressed debt group, according to people familiar with the matter. Representatives for Elliott and Angelo Gordon declined to comment as did Pillai.

Vitaliy Ardislamov, a former distressed debt analyst at BlueMountain Capital Management and portfolio manager at Signet Capital Management, started at New York-based hedge fund Taconic in April as a director in London, according to his LinkedIn profile and information from people familiar with his career. Representatives for Taconic and Signet declined to comment as did Ardislamov.

More hires are planned. Tikehau Capital is looking to hire an investment professional based in London for its team exploring opportunities in depressed credit markets, according to Maxime Laurent-Bellue, head of the French firm’s tactical strategies group.

The candidate should have experience of working on debt restructurings and have contacts across the market, he said. “We need someone with strong analytical skills who can lead the charge on executing and structuring deals.”

With many investors and traders working from home, most of the hires that are taking place at the moment are for middle-ranking analysts.

Searches for more senior posts may not start until the next quarter because the process is more costly and complex, according to Andrew Perry, a managing director at Paragon Search Partners.

His firm, which specializes in mid- and senior-tier appointments in Europe and the U.S., picked up seven new mandates for distressed debt hires this month. Normally it handles a maximum of 15 searches a year in this area.