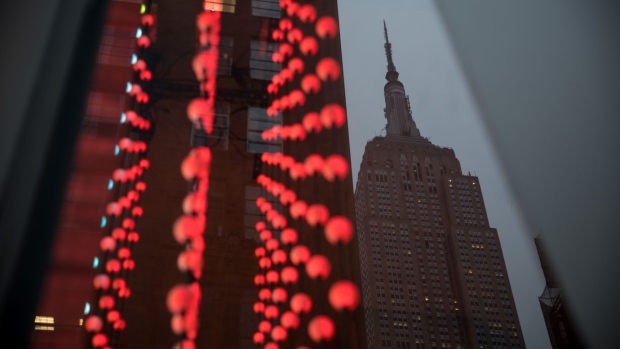 The Empire State Building is reflected in a building. Photographer: Michael Nagle/Bloomberg , Bloomberg

(Bloomberg) -- Investors expect to pull $20 billion from hedge fund managers this year, a sign there’s no turnaround in sight for the industry.

Endowments, foundations, pension and sovereign wealth funds are likely to make the most withdrawals, according to a recent study by Goldman Sachs Group Inc. It surveyed 444 investors in December who oversee or advise $1 trillion in hedge fund assets.

Hedge funds have been under pressure as performance has waned since the financial crisis. Over the last five years, the industry has underperformed a 60/40 equity-bond portfolio for the first time since at least 1990, according to Goldman. Investors have revolted by pulling money and forcing managers to slash fees, and many marquee names have quit managing outside money.

Most of the allocators surveyed by Goldman blame the macro picture of coordinated, loose central bank policy for hedge funds’ failure, with the expectation that eventually the environment will improve. But almost half of the allocators said the industry is suffering from a structural problem that’s harder to fix: It’s become too large and the explosion of passive and quantitative strategies has complicated fundamental investing.

The result is that allocators are investing in fewer managers that tend to be more specialized, use greater leverage, and invest in less liquid assets, the study found.

That’s a turn from the traditional concept of a hedge fund manager that takes a generalist approach and trades in and out of liquid securities. Instead, 62% of the allocators surveyed by Goldman now use hedge funds to invest in private assets.

Still, the $20 billion withdrawal estimate would be an improvement from last year. Hedge Fund Research reported that net withdrawals for the industry totaled $43 billion for 2019, while EVestment’s figure was much starker, at almost $98 billion.

Goldman found that investors are shifting much of the money toward other alternative investments -- primarily private equity and venture capital, followed by private credit.

To contact the reporter on this story: Katia Porzecanski in New York at kporzecansk1@bloomberg.net

To contact the editors responsible for this story: Sam Mamudi at smamudi@bloomberg.net, Alan Mirabella, Steve Dickson