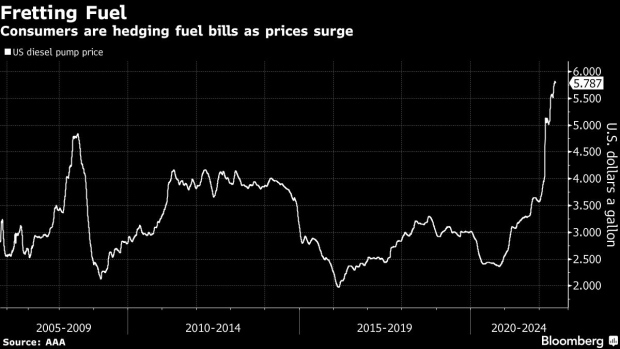 (Bloomberg) -- A growing number of companies are rushing to protect themselves against another surge in oil prices, with traders and brokers reporting the busiest spell of consumer hedging in years.

Over the past few weeks, there has been a renewed appetite from airlines -- a mainstay of demand before the pandemic -- to protect against an upswing. There’s also been an influx of first-timers, including new-to-hedging trucking and manufacturing firms. Walt Disney Co. disclosed last month that it’s hedging again for the first time since the virus.

The activity is a sign that companies using a lot of fuel are fretting over another potentially paralyzing move higher in prices. Economies the world over are struggling with the fastest rate of inflation in years and energy costs are feeding that.

“We have had more inquiries about fuel hedging in the last few weeks and months than we have had in the past few years,” said Patrick McCrann, director of business development at AEGIS Hedging Solutions, which helps companies with their hedging strategies.

Disney’s Chief Financial Officer Christine McCarthy said during a conference call with analysts last month that the company had reinstated its fuel-hedging program for Walt Disney World after halting it during the pandemic.

Among airlines, one of the clearest public examples this month has been that of European budget airline Wizz Air Holdings Plc.

While the company cancelled its hedging policy after losing money during the pandemic, it recently resumed activity in the face of sustained commodity volatility. That’s in a price environment where Brent crude is up about 20% since Russia invaded Ukraine, and end-user fuel prices have gained even more.

To be sure, hedging in a high market can be expensive because demand for protection against a further surge is red hot. In recent months, those higher hedging costs have been accentuated by a lack of liquidity, after prices saw giant swings following the invasion. That makes it harder to find counterparties and agree on prices.

Some airlines have been lucky enough to already lock in prices well into next year.

“We’re also very fortunate that for the next 12 months, we’re very well hedged on fuel,” Ryanair Holdings Plc CEO Michael O’Leary said during an earnings call last month. “I would ascribe that more to dumb luck than supremely intelligent management. But nevertheless, we have 80% of our fuel purchased forward out to March 2023 at less than $70 per barrel.”

Much of the recent deal flows in consumer hedging have been in over-the-counter markets, several participants in the activity said, adding that there have also been signs of consumer hedging in US heating oil and ICE gasoil contracts.

For retail prices, companies also use an EIA-linked diesel swap, according to Jay Stevens vice president of market analytics at AEGIS.

Many businesses have been taking advantage of any dips in prices -- such as those seen last week -- to buy additional protection against surging prices, traders said.

As war drags on and supply-demand imbalances get more pronounced, they’re looking to protect against what some analysts see as a period of higher prices in the coming months.

“We have a very robust fuel-hedging program at Walt Disney World and that reduces risk and minimizes volatility, reduces volatility in the cost of fuel,” McCarthy said during the call last month. “We have re-opened that program and we are doing what we can to minimize the impact on that particular cost.”