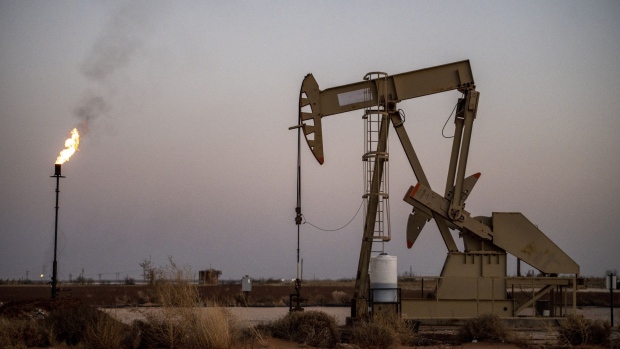 An oil pump jack in Midland, Texas, US, on Thursday, April 7, 2022. Midland, Texas, is used to booms and busts. But even here, prices are shocking the local economy — and the Fed may not be able to help. , Bloomberg

(Bloomberg) -- As Texas officials hunt for financial firms hostile to the energy industry, Wall Street is rolling out its fossil fuel bona fides to convince officials not to bar them from doing business with the state.

Twenty firms, including JPMorgan Chase & Co. and HSBC, have so far replied to requests from state comptroller Glenn Hegar over the past two months to disclose whether they restrict or prohibit doing business with energy companies by explicitly saying they do not. Bloomberg obtained the letters through a public-records request. One small Dallas-based firm even replied “Hell no.”

Hegar has to devise a list of companies deemed to be boycotting the energy industry by Sept. 1 after a new bill enacted last year limits governments from entering into certain contracts with firms that have curtailed ties with oil and gas companies.

The responses offer a window into how Wall Street is navigating the political landscape that Texas has thrust on the financial services industry. The headache for banks and asset managers may not stop in the Lone Star State. Republican lawmakers around the country have taken up bills that are similar to what Texas passed.

JPMorgan said that its credit exposure to oil and gas as an industry totaled $42.6 billion as of December 2021. In its letter to the comptroller the bank said it recognizes the importance of balancing the reduction of greenhouse gas emissions with the need for policies that ensure the availability of energy resources.

“We would like to note at the outset that we provide financial products and services to many companies that engage in the exploration, production, utilization, transportation, sale, or manufacturing of fossil fuel-based energy (“energy companies”), and intend to do so in the future,” wrote Stacey Friedman, executive vice president and general counsel for JPMorgan in the letter.

Some of the financing decisions the bank makes are based on ordinary business reasons and to manage reputation risk, according to the letter.  JPMorgan doesn’t lend to coal-mining clients that are involved in mountaintop mining.

“Hell no,” wrote John Alban, chief executive officer of Dallas-based Cushing Asset Management, in his response obtained by Bloomberg through a public-record request. Instead, he said his company has “long been in the business of investing in traditional oil and gas firms,” but he said it has expanded to include renewable energy sources.

HSBC said in a May 16 letter that it has committed to aligning its financed emissions -- greenhouse gas emitted by its portfolio customers -- to net zero by 2050 or sooner. The company said it provides financial services to energy companies located in Texas and engages with the energy sector.

“HSBC does not consider itself to be a company which ‘boycotts’ financing of energy companies,” the letter said. “HSBC believes it can have the biggest impact on climate action by actively engaging with its clients on their transition, focusing on the need for robust and credible transition plans, and by providing the financing and advisory solutions that help unlock the investments needed.”

abrdn Plc, a U.K.-based investment firm, noted that it’s committed to the net zero asset managers initiative, which is working with clients to achieve net zero carbon emissions by 2050 or earlier. It joined the initiative in response to client requests and increasing regulation regarding carbon disclosure, the letter said.

London-based asset manager Schroders said the firm doesn’t boycott energy companies broadly but they do identify financial risks to client portfolios. For example, they shy away from companies that are “directly and materially” exposed to thermal coal mining, which is consistent with the firm’s business judgment that “these companies are not sustainable over the long term as a valuable investment proposition unless they transition to a new model.”

Spokespeople for JPMorgan, HSBC and abrdn declined to comment further. A spokesperson for Schroders didn’t have an immediate comment.

Out of the 22 letters replying to the comptroller received by Bloomberg as of May 16, two of the firms -- Reynders, McVeigh Capital Management and Rathbones Group Plc -- didn’t specify whether or not they boycott energy companies. Instead, Rathbones provided some clarity on its decision not to invest in certain energy activities in part because the company said it was in the best long-term interest for clients and society.

In a letter to Hegar dated May 6, Maria Egan, a vice president at Boston-based Reynders, McVeigh, said the firm specializes in socially responsible investing and applauds Texas for leading the nation in renewable energy generation. But she expressed her disappointment in the comptroller’s inquiry.

“We believe that this is out of line with Texas’ massive push to replace fossil fuels with renewable energy,” said Egan in an email to Bloomberg.

Rathbones didn’t immediately respond to a request for comment.

It’s been more than 61 days since the comptroller sent out its first round of letters to 19 firms in mid-March. Hegar’s office sent a second round of letters to more than 100 firms in mid-April. The comptroller has stated that companies receiving the letters must provide a written response before the 61st day after receipt or they will be “presumed to be boycotting energy companies.”