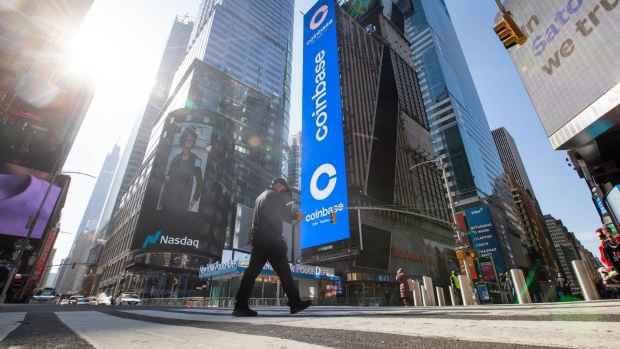 (Bloomberg) -- Coinbase Global Inc. could use some more communication specialists, including someone with “excellent political judgment” and a strong policy network in Washington. The company also wants to beef up its legal and compliance team by about two dozen people.

These are among more than 350 job openings on Coinbase’s website that highlight the company’s ambitions as well as the challenges it faces in a rapidly growing cyrptocurrency industry, where regulatory scrutiny is being ratcheted up by a U.S. Securities and Exchange Commission chair who says he believes it’s better to be proactive on digital currencies than to react following a crisis. The jobs build on the net 450 new employees the company added in the second quarter, bringing its head count to 2,176 at the end of the period, according to an August letter to shareholders.

Coinbase CEO Brian Armstrong raised eyebrows this month with a tweet storm denouncing what he called “sketchy behavior” from the SEC when it came to the company’s dealings with the regulator about a planned product called Lend, which would allow customers to earn interest on their crypto holdings. Coinbase then announced it was pulling the plug on the contentious program, which the SEC had warned could run afoul of securities laws, by updating an old blog post at 5 p.m. last Friday evening.

Some support in the company’s dialog with the SEC and lawmakers is in the works as the company continues to ramp up hiring. The open position for “United States Policy Communications Manager” at Coinbase would oversee “media relations and strategic presence in critical policy debates within D.C. and key states across the country.” The company plans to publicly announce a regulatory framework for cryptocurrencies that it will propose to federal officials, Coindesk.com reported on Tuesday.

Among 24 legal and compliance jobs, Coinbase is looking for a “head of international compliance country governance and oversight” based in London, as well as “global anti-bribery and corruption managers” in the U.K. and U.S. There are associate general counsel positions dealing with such legal issues as “data infrastructure, payments, risk, client onboarding, identity and trust and safety.”

Many of the job openings are for computer engineers and data scientists. Armstrong has made it clear he wants the company to improve its reputation for being on the cutting edge of crypto, rather than just scaling up existing product offerings. A major focus of hiring will be India, where the company hopes to add hundreds of engineers.

There are also 60 listings in the “Customer Experience” category. Coinbase, whose users have been known to complain when they get locked out of their accounts or have their holdings stolen by hackers, is advertising jobs located in Dublin and remote-work in the U.S. to deal with “formal, regulatory and litigation complaints.” The company said in July it had already increased its customer support staff by five times since January.

The listings also highlight ambitions to expand through mergers and acquisitions at the company that just raised $2 billion in the corporate bond market, including opportunities to manage “the end-to-end M&A integration process” in the Asia Pacific region and the U.S. Its desire to beef up business with institutional investors is also on display, with more than a dozen job openings in “institutional sales, trading and prime services,” including one job that requires “deep understanding of ISDA, margin and securities lending legal agreements as well as not standard long form trade structures.”

One notable perk for some of the jobs listed: Free snacks and lunch.