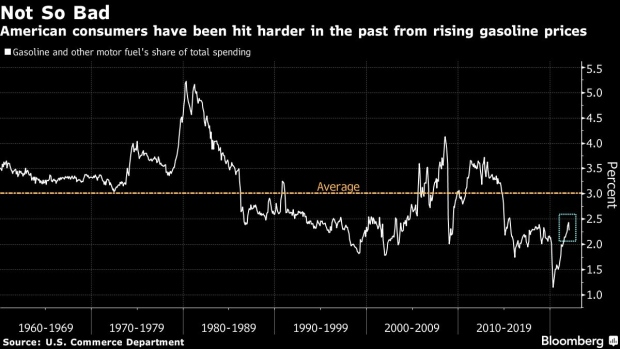 With oil prices above $100 a barrel further exacerbating a cost-of-living increase for millions of consumers, there is growing momentum behind the prospects of demand destruction happening this year, though at what price level is hotly debated. To be sure, soaring energy costs not only threaten a still-fragile economic recovery from the pandemic but also pose a serious dilemma for the Biden Administration. For now, U.S. gasoline demand is surging despite prices just off records reached earlier this month.

Here are some explanations as to why crude demand hasn’t cracked in the face of elevated prices.

Americans’ gasoline expenditures as a share of total spending are much lower today than they were in the past. In January, outlays on gasoline were just 2.3% of the total, according to the latest available Commerce Department data, and well below the long-term average. Nonetheless, the pace of increases are significant, Omair Sharif, president of Inflation Insights, said in a note, adding that the share is likely to jump to about 2.9% in March.

“In terms of a shock move in such a short time span, it just hasn’t occurred too often in the last 63 years,” Sharif said.

The average retail gasoline price in the U.S. may have climbed to a record high above $4 a gallon this month, but when adjusted for inflation, it’s below the peak of slightly more than $5.20 set in July 2008. At the moment, the national average is about $4.24 a gallon, according to AAA.

Many U.S. drivers, stung by record gasoline prices, said this month they’d pay even more if it would end Russia’s war in Ukraine. Meanwhile, electric cars represent too small a percentage of vehicle sales to make any meaningful short-term dent in oil demand, especially since there are waiting lists for the more-desirable ones.

But the longer prices stay at these levels, the bigger the sticker shock for consumers.

In the latest AAA survey, 59% of drivers said they would change their travel habits or lifestyle if the cost of gasoline hit $4 per gallon. If pump prices were to reach $5, which it has in the Western part of the country, three-quarters said they would need to adjust their lifestyle to offset the increase.

It’s All About the Economy

Even as analysts debate whether $150 a barrel oil is the level where demand destruction starts to kick in, the broader health of the economy is key.

“You still have the issue ‘Can price simply destroy demand in isolation or does it need to come via a broader economic slowdown?’ And history suggests that the answer to that question is probably yes. As in, it probably requires a broader economic slowdown to then destroy enough oil demand,” Martijn Rats, global oil strategist at Morgan Stanley said in a Bloomberg Television interview.

Still, some investors and traders say demand may be less elastic than many expect.

Beyond Covid, crude oil demand has essentially been up and to the right at varying levels for the last 40 years, said James Mick, senior portfolio manager at TortoiseEcofin, noting that in 2008/2009, there was an approximate 1.4 million barrel per day decline in global demand over a two-year period.

“Our worst recession in decades saw barely a blip on crude demand worldwide. In other words, demand has been incredibly resilient and we would anticipate it remains so, even if we have a recession.”