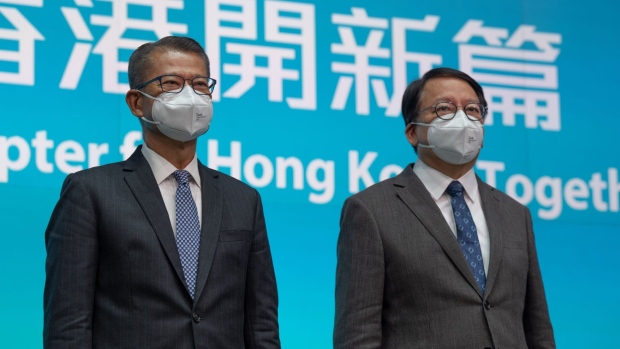 John Lee, Hong Kong's chief executive-elect, bottom center, and the Principal Officials pose for a photograph at a news conference in Hong Kong, China, on Sunday, June 19, 2022. Hong Kong Financial Secretary Paul Chan will stay on in his post, according to a government statement, as incoming leader John Lee opts for stability in an effort to bolster business confidence in the struggling Asian financial hub. , Bloomberg

The 21-member group approved by China’s State Council keeps just six members of outgoing leader Carrie Lam’s team, with almost all those remaining having overseen the city’s crackdown on dissent. The new line-up includes three people who -- like Lee -- have been sanctioned by the US for suppressing democratic freedoms, hands the health portfolio to a one-time defender of China’s Covid Zero strategy, and sees a controversial pro-Beijing figure lead education policy.

Six members -- or 30% of the cabinet -- are women, the most in any initial pick since the city’s return to Chinese rule in 1997, handling portfolios cited by the central government as top priorities, such as housing and youth affairs. At least three officials earned professional qualifications or worked on the mainland, with Beijing-born Innovation Secretary Sun Dong telling reporters he can’t speak the local language Cantonese very well, according Ta Kung Pao newspaper.

Lee and his cabinet take office Friday, a date that marks 25 years of Chinese rule in the city in celebrations attended by Xi. Here are the key officials to watch:

Chan, 63, was Lam’s right-hand man during her five-year term, joining her at meetings with top mainland officials including Xi. The former Immigration Department chief is also secretary-general of the Committee for Safeguarding National Security that oversees implementation of the sweeping legislation Beijing imposed in June 2020. The US sanctioned Chan and 10 other officials for their role in “undermining Hong Kong’s autonomy” shortly after the security law passed.

Paul Chan, 67, became financial secretary in 2017. A certified public accountant, he steered the economy through a historic two-year recession and the deep impact of the city’s worst Covid outbreak earlier this year. He’s liked by the business community, and was once seen as a contender for the chief executive’s role. His recent policies include consumption vouchers to boost consumer spending and pandemic relief for businesses. His inclusion will likely ease fears of further political turmoil that could rock markets.

Paul Lam, 54, was vice chairman and chairman of the Hong Kong Bar Association from 2014 to 2017. During his tenure, the HKBA issued a statement saying it was “appalled” by the decision of China’s top legislative body to put a joint immigration checkpoint for a high-speed rail on Hong Kong soil. Despite that, he has strong mainland ties: he was an arbitrator at the Shenzhen Court of International Arbitration, and passed the Guangdong-Hong Kong-Macao Greater Bay Area Legal Professional Exam, connections that could bring the city closer to southern China.

The former police officer, 56, became the city’s top security official during Lam’s cabinet reshuffle last year, and is also sanctioned. Tang led the city’s police force amid 2019’s pro-democracy unrest, when officers were heavily criticized for using what protesters said was excessive force. Since then, he’s been vocal about protecting the city’s national security and eradicating any forms of domestic “terrorism.”

Lo, 61, said in February that living with the virus would “get us all killed.” Since then, he’s softened saying not all China’s pandemic policies are right for Hong Kong. Lo will be key in deciding whether the city finally breaks with China’s zero-tolerance pandemic policy that’s shut its international borders for years. The Macau-born surgeon previously ran the University of Hong Kong-Shenzhen Hospital, in southern China, and has more than 30 years experience in Hong Kong and mainland health care systems.

Choi, 55, will likely back further “patriotic” reforms to the city’s education system, which Beijing has partly blamed for fostering anti-government sentiment. Hong Kong recently imposed a more pro-China curriculum that educates children as young as six on national security law offenses. Some 17,000 people signed a petition against Choi’s appointment to undersecretary for education in 2017, amid perceptions she was too pro-China. Choi told reporters she hopes to help students establish a national identity and love their country.

Beijing-born scientist Sun Dong was one of only two lawmakers to take his Legislative Council oath in Mandarin. When asked about his ability to speak Cantonese, Sun said he can understand the local language and will try to speak more of it. His cabinet post could mark the “beginning of the participation of mainland elite in the government’s top leadership,” said Eilo Yu, associate professor in government and public administration at the University of Macau. “There could be a tendency of mainland elites who migrate to Hong Kong to join the cabinet.”