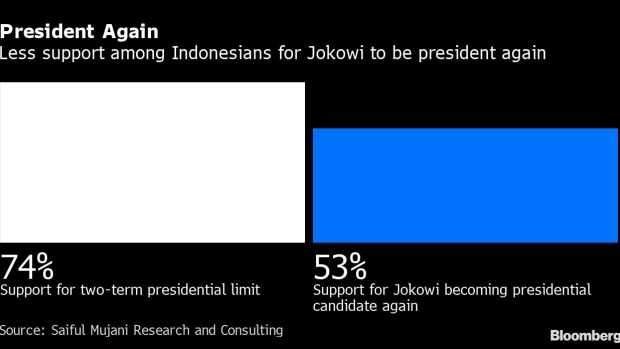 Joko Widodo, Indonesia's president, left, visits the National Cemetery in Seoul, South Korea, on Thursday, July 28, 2022. Jokowi is visiting China, Japan and South Korea this week, on the back of recent trips to Ukraine and Russia to discuss the war and global grain security issues. , Bloomberg

(Bloomberg) -- Indonesian President Joko Widodo has less than two years left in his final term before he steps down from running Southeast Asia’s largest economy. Several of his backers in the political class don’t want to see him leave when the time is up.

Last week a senior official from the party that backed Jokowi, as the president is known, became the latest influential figure to hint he may retain some power when his term ends. Bambang Wuryanto, who runs election campaigns, suggested Jokowi return as vice president -- an idea former Philippine leader Rodrigo Duterte also considered.

The argument is similar to what lawmakers from the ruling coalition have put forward: Jokowi spent close to half of his second term fighting the pandemic and has little time to cement his legacy. He still hasn’t reached his goals, which include the initial shift to a new capital to Borneo, stabilizing the budget and pushing for annual growth of 7%.

Jokowi has avoided direct answers when asked whether he would support amending the constitution to allow for a third-term presidency and to even delay polls. He has only said he will abide by the constitution. His close ally, cabinet member Luhut Panjaitan, said in March the charter could be amended and the president will have to follow it.

The president remains popular though an opinion survey published this week showed he lost some support for raising petrol prices by 30%. Any push from Jokowi himself to extend the presidential term limits may worsen his standing among Indonesians wary of a return to the era of former president Suharto, a military general who ruled with an iron fist for 31 years.

“Changing the constitution to allow the president to serve longer or more terms would not just dissolve the meaning of ‘reformasi’ but it will also set back democracy,” said constitutional law expert Refly Harun, referring to a battlecry for reform by activists during the anti-Suharto protests. “That will betray the objective of ‘reformasi.’”

Here’s how the scenarios may play out:

For Jokowi to contest in the presidential elections for a third time, the constitution needs to be amended. Changes to the nation’s charter are rare with the last made in 2002, which included capping the presidential limits to two terms to prevent a repeat of Suharto’s rule.

So far, there’s no indication that an amendment is in the works. For this to happen, it will require a third of the People’s Consultative Assembly to propose amendments to the provisions of the constitution.

Then, a two-thirds majority is needed to make the changes. Once the draft is ready, it requires a 50% plus one vote in support from the assembly -- which has 711 members -- to approve the draft.

The legislative math favors Jokowi, whose ruling coalition accounts for four in every five lawmakers. But this might prove unpopular with Indonesians. In a 2021 poll, while 74% of respondents approved of the current two-term limit, support dropped to 52.9% when it came to Jokowi running again in 2024.

Even if Jokowi decides to contest, he will need to seek the support of his Indonesian Democratic Party of Struggle, which is controlled by former Indonesian president Megawati Soekarnoputri.

She is keen on seeing her daughter Puan Maharani, the parliament speaker, become the next leader of the country. Puan is not even among the three frontrunners in the opinion polls but if this doesn’t improve in the next year, her mother could look at another presidential candidate.

While there’s a constitutional rule on presidential term limits, there’s none if an incumbent president runs for the vice-presidential post in the next polls after his tenure ends.

That was a suggestion floated by a senior official from Jokowi’s party. But to contest as a vice-presidential candidate for his party, he still needs Soekarnoputri’s blessings. Jokowi has publicly refused to be drawn into such discussions.

If he takes this route, he could look at running with rival-turned-ally Prabowo Subianto, who’s the incumbent defense minister and is seen as the favorite to win the presidency. Prabowo hasn’t indicated whether he will work with Jokowi, who co-opted the former commander to his cabinet after the two faced off in a bitterly contested election.

Jokowi could join Prabowo’s Gerindra party and be his vice-presidential candidate, said Bambang Harymurti, the former editor-in-chief of local news outlet Tempo who has been writing about Indonesian politics for four decades.

“From an ideological standpoint, both men share the same beliefs in nationalism and secularism,” said Harymurti. “Personal relationship-wise, they have been cordial since Prabowo joined Jokowi’s cabinet and they’ve had no conflicts.”

3. Jokowi Backs an Ally for President

If Jokowi leaves political office for good, his next course is to back an ally that could see through his vision. The person has to be committed to the same goals such as building the new capital.

Jokowi has been showing support to Central Java Governor Ganjar Pranowo, and the two have been seen at several events together. Pranowo has been coming in at second place after Prabowo in opinion polls and is seen as having a similar pragmatic and personalized approach to governing as Jokowi.

“He has the technocrat-bureaucrat experience given he’s a regional governor,” said D. Nicky Fahrizal, a researcher at the Jakarta-based Centre for Strategic and International Studies. “And there are similarities in leadership and communication styles.”

Pranowo is also a member of PDI-P, and he would require Soekarnoputri support to contest. And there are chances this won’t happen. In a party meeting in June, she sternly warned members of making political maneuvers without her blessings and should they be caught, expulsion was on the cards.

Several political leaders have publicly proposed delaying the 2024 elections by three years for policy continuity. While the next election date has been announced and politicians are building up their campaign war chests, speculation hasn’t quite stopped over the prospect of a postponement.

Since Suharto’s downfall in 1998, elections have not been deferred and political commentators have largely discounted this from happening.

“This is highly unlikely unless the political elites who are bent on having the elections deferred create chaos or social conflict through intelligence operations,” Harymurti said. “But the Indonesian society now are unlikely to be influenced unlike the past.”