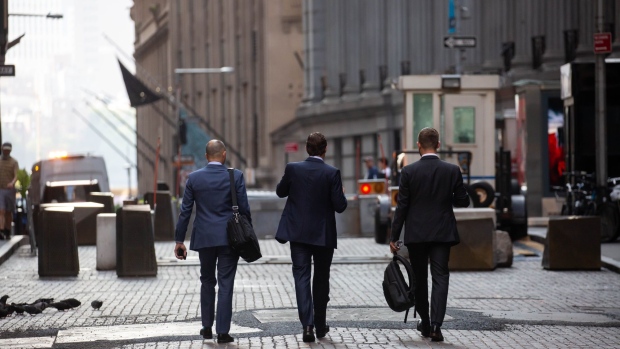 Pedestrians walk along Wall Street near the New York Stock Exchange (NYSE) in New York, U.S., on Thursday, July 22, 2021. After a year of Zoom meetings and awkward virtual happy hours, New York's youngest aspiring financiers have returned to the offices of the city's investment banks, where they're making the most of the in-person mentoring and networking they've lacked during the pandemic. Photographer: Michael Nagle/Bloomberg , Bloomberg

(Bloomberg) -- Despite the headlines of massive layoffs in the tech industry, the job market is still running hot. Americans are dropping out of the labor force as an aging population and a lack of immigration mean that the competition for workers will remain fierce.

Of course, pay is paramount for most people — but beyond an attractive salary, in the current environment companies need to find new ways to distinguish themselves as an employer of choice, experts say.

“At first, companies were throwing money at the problem: You had retention bonuses, and you had pay adjustments. And those did serve a purpose,” said Melissa Swift, US transformation leader at consulting firm Mercer. “But now we're seeing a shift to sustainable retention strategies: What can you do going forward that will actually continue to retain people so you don’t keep trying to put out the fire with cash.”

Here are five of the top strategies and benefits experts say will be important in 2023. Hint: It goes beyond free lunch, commuting stipends and other sweeteners that dominated this year’s return-to-office push.

The opportunity to work from home tops the list of priorities for most candidates with remote-capable jobs. Studies have shown that remote work improves engagement, cuts attrition and boosts productivity — despite many bosses placing a high value on getting employees back to their desks.

“I expect the move to hybrid work and work-from-anywhere to be a long-term adjustment given that flexibility helps companies attract and retain high-quality, diverse talent,” said Prithwiraj Choudhury, a professor at Harvard Business School who studies remote work. “While the leading companies offering flexibility will benefit the most, laggards will be forced to catch up to prevent the drift of talent.”

“Flexibility” is the new magic word for recruiters. And for good reason: flexibility (or lack thereof) is consistently one of the biggest reasons employees cite for staying or leaving a job, according to Catherine Hartmann, global head of work, rewards and careers at consulting firm Willis Towers Watson Plc.

Getting to work from home is just one aspect, though. This is about having control over your schedule in a more general way.

“Even the organizations that have returned to the office have made some significant changes in how they think about flexibility,” said Ben Granger, chief workplace psychologist at Qualtrics. Some now allow parents to cut and paste schedules, like leaving mid-afternoon to pick up kids and then logging on later, or commuting late morning after getting kids to school.

Companies are redesigning work to build in proactive rest that prevents burnout rather than responding to it after the fact, said Caitlin Duffy, research director at consulting firm Gartner Inc. Some strategies include meeting-free days, summer Fridays, four-day weeks, firm-wide shutdowns, upping vacation time, reducing tech overload and even a daily nap.

This shift has just begun. “I don't think we're there on the really, truly sustainable retention strategy — I do think those are going to have to do more with everyday employee experience,” Swift said.

Are staffers overworked, are managers supportive? “The companies that really come out winners in this race will be the ones where six months from now, working there actually feels different,” she said.

With compensation failing to keep pace with rising costs, workers are looking for employers that find other ways to take the edge off inflation. An analysis by Lightcast.io, a labor market analytics company, found that one rising benefit is tuition assistance — offered in about 8% of job postings in 2022, up from 7% in 2021.

“In the past, when people thought about financial well-being they were definitely focused more on retirement and longer-term wealth,” Hartmann said. “But there's other ways people can have better financial well-being, like elder-care assistance or child care. That cost being covered by the company is a way for you to have more money in your pocket.”

Even if the labor market has stayed strong so far, applicants will likely become more cautious as economic conditions shift. Startups and tech companies are especially unstable, as the easy-money era ends and a new wave of austerity begins.

In 2022, employees were penalized with a so-called “loyalty tax” for staying with their employer rather than leaving for a pay raise elsewhere, Hartmann said. This year, companies with track records of stability even in challenging economic times will be in a better position to attract top talent than flashy new startups that have yet to turn a profit.

“Job security is going to be a bigger thing,” she said, with applicants gauging the strength of an employer’s leadership, business prospects and financial resiliency.