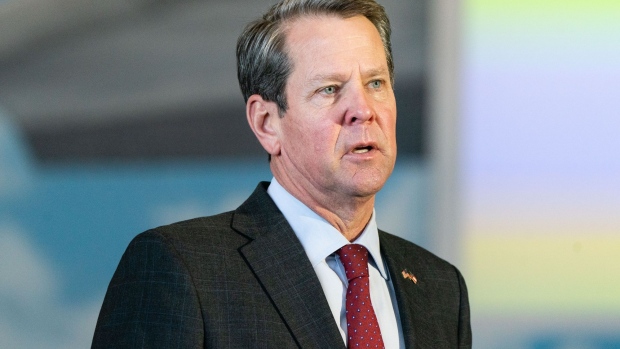 (Bloomberg) -- Georgia voters are set to deliver the biggest test to Donald Trump’s grip on the Republican party, in a primary season marked by the former president’s efforts to bolster his sway with party faithful and exact political retribution for those who refused to overturn his 2020 electoral loss.

Here is a guide to the election in Georgia:

Kemp, 58, is running for re-election as a conservative who delivered on issues important to the Republican base, including tough abortion limits and a ban on transgender athletes in high school sports. He is also touting his economic development record, including the biggest project in state history, a Hyundai Motor Co. electric vehicle plant near Savannah.

David Perdue, 72, is a former Dollar General CEO who was recruited to challenge Kemp by Donald Trump and is running on Trump’s stolen election claims and his allegation Kemp should have acted to overturn the results. He also is promising to end the state income tax.

Two other candidates are in the race, but each has less than 10% support.

Recent polls have shown Kemp leading Perdue by double digits. He was 23 percentage points ahead in the Real Clear Politics polling average. The winner will face Democrat Stacey Abrams in November.

Raffensperger, 67, was targeted by Trump for certifying the 2020 election and has repeatedly said Trump’s stolen election claims are false. He is running on a promise to push a constitutional amendment to ban voting by non-citizens, and on his defense of the 2020 election’s integrity.

Congressman Jody Hice, 62, is a former pastor who is running on Trump’s stolen election claim. He is endorsed by Trump.

Senator Raphael Warnock, 52, has no significant opposition in the Democratic primary. He is the senior pastor of Ebenezer Baptist Church in Atlanta, where Martin Luther King Jr. once preached, and must defend his seat because his 2021 win was in a special election to finish the term of Johnny Isakson, who was ill and has since died.

Former University of Georgia football legend Herschel Walker, 60, is backed by Trump and is running far ahead of any other GOP primary contender despite participating in no debates and avoiding the news media.

Warnock was ahead by 79 percentage points in the one poll that measured his primary race. Walker was up by a Real Clear Politics average of 55.9 points. In polling on the November race, the two are virtually tied according to the RCP average of polls.

Registered voters can cast ballots in person from 7 a.m. to 7 p.m.