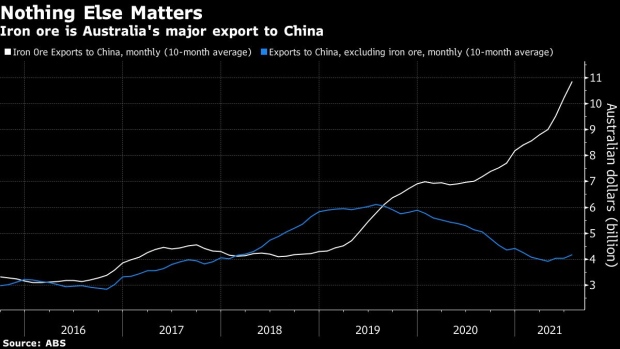 (Bloomberg) -- Australia’s new Indo-Pacific security partnership with the U.S. and U.K. that allows it to acquire nuclear-powered submarines drew a swift verbal retort for all three nations from China. But Beijing might have more than just words to come for Canberra.

In recent times, China has responded proportionately to perceived slights from Down Under via punitive trade strikes that targeted products ranging from coal to barley, lobsters and wine. In the event Beijing were to follow a similar pattern on the nuclear submarines, there are several sectors it could target.

These range from sheep meat to almonds, or once borders re-open, homing in on international education -- one of Australia’s top services exports in the pre-pandemic period -- and tourism.

“Clamping down on Chinese students studying here -- even online -- and on tourists visiting are strong candidates for inflicting significant economic damage to the lucrative higher education and tourism sectors in 2022,” said Tony Makin, an expert in international macroeconomics and professor at Griffith University.

China took off the gloves on trade after Canberra’s call early last year for independent investigators to enter Wuhan to probe the origins of the coronavirus -- viewed by China as a challenge to its sovereignty. That came in the wake of Australia banning Huawei Technologies Co. from building its 5G network and tightening rules on investment to ward off Chinese influence.

Sarah Hunter, chief economist for BIS Oxford Economics, has put together a vulnerability measure for commodities traded with China, which showed products most at risk are those where Australia is a small producer by international standards and/or where imports relative to total consumption in China are quite small.

“More processed goods in the food space like dairy products and potentially meat, these are all things where there are alternative supplies globally,” she said. “Australia doesn’t have a dominant position so that substitution is much easier to achieve and so those are products that we do think are vulnerable.”

To date, there have been no signs of China retaliating over the nuclear submarines deal.

Scott Waldron from the University of Queensland noted in a February presentation that sectors where China has plenty of alternative suppliers, but where the nation is a major market for the Australian side, have been a focus of attention.

China has balked at targeting Australia’s biggest export -- iron ore -- as it struggles to source the metal in the quantities required elsewhere. It’s a similar story with wool.

Iron ore has been on a rollercoaster ride since hitting a record in May, having now fallen more than 50% to less than $100 a ton. It has been pummeled as steel output curbs and a crackdown on the property sector in China combined to hit demand.

Jarrod Ball, chief economist at the Committee for Economic Development of Australia, said the next target might become “a moot point” given the way iron ore has been dropping.

“That’s going to inflict more economic pain on Australia than any of the trade strikes that we’ve seen to date,” he said. “Certainly they can look at, similar to what they’ve done to date, various commodities and agricultural products and so forth. But the economic damage from that has been pretty limited.”