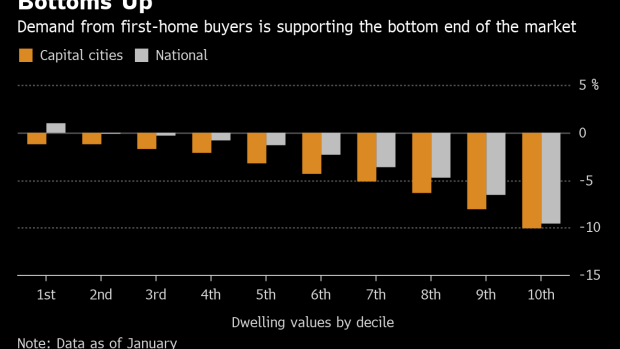 Residential buildings and houses stand in Sydney, Australia, on Saturday, Jan. 12, 2019. Prices in Australia's biggest city have tumbled 10 percent and some economists are tipping a similar fall this year. While the central bank isn't panicking just yet, a 15 percent nationwide drop in prices would cut about A$1 trillion ($720 billion) from the housing stock value. Photographer: Brendon Thorne/Bloomberg , Bloomberg

(Bloomberg) -- Australia’s worst property slump in a generation has created some obvious losers. Investors who bought at the top of the market are underwater; homeowners looking to sell are having to slash prices and developers are struggling to offload apartments as projects started during the height of the boom near completion.

But there are also some winners, from first-time home buyers to stylists sprucing up dwellings to get them camera-ready for sale. Here are five groups getting ahead despite the downturn:

The downturn has made homes more affordable for first-time buyers -– usually younger people who feared they would never get on the property ladder as prices surged as much as 75 percent during a five-year boom that peaked in mid-2017.

The median dwelling value in Sydney dropped to A$789,339 ($560,430) in February, according to CoreLogic data, from as much as A$895,117 at the top of the boom. With interest rates still near record lows, and lending curbs knocking investors out of the market, first-home buyers are back in business.

That’s showing up in lending data: the group accounted for 26.5 percent of mortgages taken out in December, up from 20 percent in February 2017.

“My hunch is it’s a pretty good time to buy,” said Stephen Koukoulas, the managing director of Market Economics Pty and a former adviser to ex-Prime Minister Julia Gillard. “If you’ve got a secure job, a deposit and financing, then affordability is pretty favorable.”

More first-time buyers getting on the property ladder is thinning the field of applicants for rental properties, just as a wave of new supply hits the market.

Rent inflation, at 0.5 percent, is around the lowest since 1993, according to the Reserve Bank of Australia. In Sydney, median weekly house rents declined 1.8 percent in the December quarter from September, and apartment rents dropped 2.8 percent, according to property listing website Domain.

Landlords are dropping rents and in some instances offering incentives such as a free pizza and case of beer to applicants willing to sign on the spot.

“I wouldn’t say it’s a tenant’s market but we are starting to see incentives being offered by landlords, like one week’s free rent,” said Leo Patterson Ross, senior policy officer with the Tenants’ Union of NSW, an advocacy group in the state of New South Wales. “Landlords know they can’t just sit back and have hundreds of applications thrown at them.”

The return of first-home buyers is supporting the bottom end of the property ladder. The value of dwellings in the lowest 10 percent of the market rose in the 12 months through January, and was little changed in the next two bands. By contrast, the top of the market is hurting the most: prices for the most-expensive properties fell almost 10 percent.

While the two major cities that led Australia’s housing boom -- Sydney and Melbourne -- are now leading the retreat, home prices in smaller towns are holding up.

Hobart (population 220,000) was the only state capital where prices rose last month, and values are up 7.2 percent in the past year. The Tasmanian city is benefiting from mainlanders cashing out and moving to the island state for a more relaxed lifestyle, and investors chasing capital growth in a tight market. Plus the median house price there is a more affordable A$457,186.

In regional cities, prices are down just 0.8 percent in the three months through February, compared to a 3.3 percent decline in the combined capitals.

Those companies that whisk in, take the tired furniture out and magically make homes look lovely are also benefiting from the property downturn. More than ever, there’s a realization by vendors that homes must be at their most presentable in order to maximize the sale price and minimize the time spent on the market.

David McLean, general manager of Furnish&Finish, said a professionally styled property can shave about four weeks off a marketing campaign and add about 12.5 percent on average to the sale price. He recalls two identical studio apartments in North Sydney in the same unit block that were on the market recently: the styled one fetched A$100,000 more.

Valiant Hire Pty is also in the residential styling business. Co-founder Steve Remington said inquiries were up about 25 percent in the first month of this year versus a typical January.

“People who previously wouldn’t have considered going down the styling path are looking at it a lot harder now,” he said. “They know that in this market, they really need to present the property in the best possible light.”

To contact the reporters on this story: Katrina Nicholas in Singapore at knicholas2@bloomberg.net;Peter Vercoe in Sydney at pvercoe@bloomberg.net

To contact the editors responsible for this story: Katrina Nicholas at knicholas2@bloomberg.net, Edward Johnson