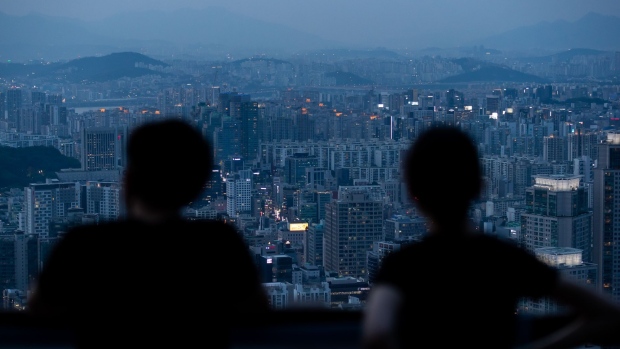 People are silhouetted as they look at a city skyline from an observation deck of Woomyeon mountain at dusk in Seoul, South Korea, on Thursday, July 9, 2020. South Korea’s government is preparing new regulations to curb excessive house price gains that have fueled public discontent over inequality and property speculation. Photographer: SeongJoon Cho/Bloomberg , Bloomberg

(Bloomberg) -- South Korea’s credit market is showing signs of stabilizing after suffering its worst rout since the global financial crisis in recent months.

But the rapid pace of deterioration in what was considered one of the safer debt markets is a reminder of the challenges that investors face worldwide as policy makers try to balance inflation control with financial stability.

The selloff in Korea’s 1,690 trillion won ($1.3 trillion) credit market was triggered by a debt default by the developer of the Legoland Korea theme park, and an insurer’s unusual step of delaying the redemption of perpetual bonds, later reversed.

The government responded to the market tumble by reactivating a support mechanism unveiled at the pandemic’s onset, while the central bank provided liquidity and took “baby steps” in raising the key policy rate. Major banks and large brokerages also helped out by committing funds to support the short-term money market.

Here is how the crisis deepened and how policy makers have responded so far (dates shown refer to publication times of relevant Bloomberg News stories):

CP YIELDS STOP RISING: Yields on three-month commercial paper were unchanged at 5.54%, the first session in about 10 weeks that they didn’t rise. The yield surge on paper that companies use to raise short-term funds had fueled concern that the nation’s credit crunch would worsen.

BOND DEMAND RISES: In a sign that demand for debt is reviving, SK Inc., the holding company of SK Group, one of the handful of so-called chaebols that dominate Korea’s economy, received about 860 billion won of orders for its planned sale of at least 230 billion won of bonds.

SECOND ROUND OF FINANCING, BOK BOOSTS AID: South Korea’s financial companies pledged to offer an additional 5 trillion won in funds, in their second round of credit market support. The Bank of Korea will provide as much as 2.5 trillion won of liquidity via repo transactions to participating firms.

BOK BABY-STEP HIKE: The Bank of Korea responded to the contraction of the short-term money market with a smaller rate hike. Governor Rhee Chang-yong also signaled the end may be near for the country’s unprecedented streak of policy tightening, as concerns increase that higher rates will weigh on economic growth. Bonds rallied.

CLOSELY WATCHING: A senior finance ministry official said the government is watching the short-term money market closely and is ready to provide support if necessary. Kim Seong-wook told Bloomberg the ministry and financial regulators have discussed possible stabilization measures during their daily meetings.

ELDER BROTHER: Korean banks said they will play an ‘elder brother’ role in the money market partly by buying short-term corporate debt, responding to a request for help from regulators.

ASIA PERPETUAL BONDS JUMP: Perpetual bonds from Asian financial institutions that suffered some of their worst routs ever pared those losses, after Heungkuk Life Insurance Co. reversed a decision to delay an early repayment.

INSURER APOLOGIZES: Heungkuk Life decided to repay early a $500 million perpetual note, after its earlier move to postpone exercising a call option caused turmoil in financial markets. The insurer apologized for the trouble.

BIG BROKERAGES JOIN: Nine big brokerages agreed to inject 450 billion won into a facility to buy project financing asset-backed commercial paper rated at least A2-. Smaller brokerages guaranteed those assets, exposing them to risk of losses in a weak market.

MAJOR BANKS HELP: Korea’s five major financial holding companies pledged a total of 95 trillion won by the end of this year to boost liquidity in the credit market and stabilize the nation’s stocks and bonds.

INSURER DELAYS CALL OPTION: Heungkuk Life took the unusual step of delaying buying back perpetual bonds on the call date, in the first such case for Korea’s insurers since 2009. Investors grew more concerned that other issuers of dollar perpetual notes in Asia would follow suit.

BOK TO THE RESCUE: The BOK said it will provide up to 6 trillion won of liquidity via repo transactions to brokerages suffering from funding strains. The central bank will temporarily accept bonds issued by banks and nine state-owned companies as eligible collateral for banks borrowing money from the bank—previously it only took government notes.

50 TRILLION WON PACKAGE: Korea pledged at least 50 trillion won in support for credit markets, including up to 20 trillion won for a bond fund and expanded Korea Development Bank-led program of buying corporate bonds and commercial paper.

GANGWON PROVINCE VOWS TO REPAY DEBT: Gangwon province pledged to repay the 205 billion won of commercial paper repackaging loans for the Legoland Korea project as criticism grew that its decision to not fulfill the debt payment caused a liquidity crunch in the nation’s corporate bond and commercial paper markets.

REVIVING BOND FUND: The government announced a plan to reactivate a bond stabilization fund established at the outset of the pandemic as corporate debt yields skyrocketed and investors’ demand for bonds plunged.

EASING BANK LIQUIDITY RULES: Regulators will suspend for six months its move to normalize banks’ liquidity-coverage ratio, part of measures to reduce bond sales by lenders. Banks have increased bond issuance to meet the liquidity requirement, and investor preference for the safer bank notes has made it even harder for non-financial firms to raise funds.

CP YIELDS JUMP TO 13-YEAR HIGH: Yields on commercial paper in Korea surged to the highest since 2009 as the missed repayment of loans for the Legoland Korea project dried up liquidity in the credit market.

MISSED REPAYMENT: Commercial paper repackaging 205 billion won of loans for the Legoland Korea project wasn’t repaid on the maturity date of Sept. 29. Gangwon province, which had an obligation to repay the loan, didn’t meet it, raising concerns over real estate project funding and the credibility of regional government-backed projects.

--With assistance from Seyoon Kim.