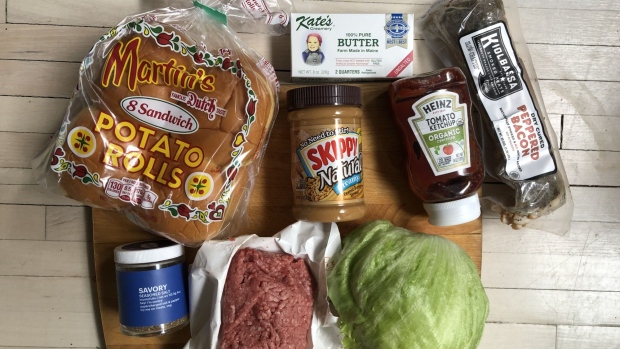 If there’s one thing that the early days of January inevitably signal, it’s the start of a healthy eating regime.

Enough with all that. It’s been a tough two years, so there is no time like the present to indulge in something that will make you feel good, at least emotionally. Like a peanut butter bacon burger.

Mason Hereford, chef and owner of the New Orleans sandwich institution Turkey and the Wolf, swears by the dish, which was a staple at the now-shuttered French Quarter dive Yo Mama’s Bar & Grill. “The first time I went to Yo Mama’s was because someone said, ‘They have this burger with peanut burger.’ Having had one, I never strayed from that order,” recalls Hereford. It was, he decrees, “pure comfort.”

Indeed, Hereford is such a fan, he put the recipe in his upcoming cookbook, Turkey and the Wolf: Flavor Trippin’ in New Orleans with JJ Goode (Feb. 15; Ten Speed Press; $30).

Hereford might be the country’s leading sandwich expert. Turkey and the Wolf was named the Best New Restaurant in America by Bon Appétit magazine in 2017, which is no small title for a corner shop whose specialty is a fried bologna sandwich. The greatest dish on the menu, though, is an incredible triple-decker collard green melt, dripping with pickled pepper dressing—it was one the best things I ate last year.

His delightful book unsurprisingly includes recipes for those standards, as well as for a mayo-enriched hummus, topped with chili crunch peas; bagel bites accentuated with a brilliant concoction called pizza cream cheese; and spicy fried chicken salad on roti. In truth, no recipe in this book will fail to deliver a strong dose of comfort—not to mention calories—on a tough day.

Which brings us to the peanut butter bacon burger. Hereford believes that burgers follow different rules than sandwiches. Sandwiches can be almost anything within two slices of bread. But with burgers, there’s less room to go crazy.

“Because we all grew up on standard burger—how your parents made it, how the fast-food place made it—there is already an area of your mind that a burger is parked in, and you don’t want to stray too far.” It’s all right to get weird, says Hereford, “but less weird.” What makes the peanut butter bacon burger fine, says the chef, is that the topping “is not a novelty, it’s freaking delicious.”

Guess what? It is freaking delicious.

Key to the success of the burger is that there are minimal ingredients, so they each play a key role. The creamy peanut butter acts almost like a sauce, melting onto the thin, seared burger patties and contrasting with the salty, crunchy, fatty bacon. The red onion adds a sweet crisp hit, and just maybe you’ll consider the ketchup as a savory stand in for jelly.

You might want to taste the peanut butter bacon burger from the hands of the master. It does make occasional appearances as a special at Turkey and the Wolf and at its pop-up burger nights. Hereford says he’s written out the plans and menu for a burger spot, and even has a name: Mama Tried. Unfortunately, it’s not the next project he’s lined up, but several of the dishes are in the Turkey and the Wolf cookbook. The chapter is fittingly called “Mama Tried.”

The following recipe is adapted from the upcoming Turkey and the Wolf: Flavor Trippin’ in New Orleans, by Mason Hereford with JJ Goode.

Set a medium cast-iron skillet over high heat until it’s pretty hot. While the skillet’s heating up, put the beef balls between wax paper or plastic wrap and evenly flatten to make four 6-inch patties. Add about 1 tsp. of the butter to the hot pan and swirl it around. Lower the heat to medium, then add 2 patties and season the upside liberally with seasoned salt (a generous ¼ tsp. per patty). Cook until the first side gets a little brown (you’re not looking for a crust here), about 45 seconds. Flip the patties and cook for about 45 seconds more. Stack the patties on a plate and wipe the cut sides of one roll in the pan to mop up the buttery drippings, leaving it a few seconds so it gets a little toasty. Keep warm.

Cook the other patties the same way (the butter, the Lawry’s); sop up the drippings with the remaining roll.

No real rules apply to building the burger, as long as you get it all between the buns: On the bun bottoms, add the lettuce leaf and some onion. Add the patty stack, then some peanut butter—Hereford goes large and uses three tablespoons, but two may be reasonable) and the bacon (break the strips to fit on the burger). Swipe some ketchup on the top bun, cap the burger, and eat.