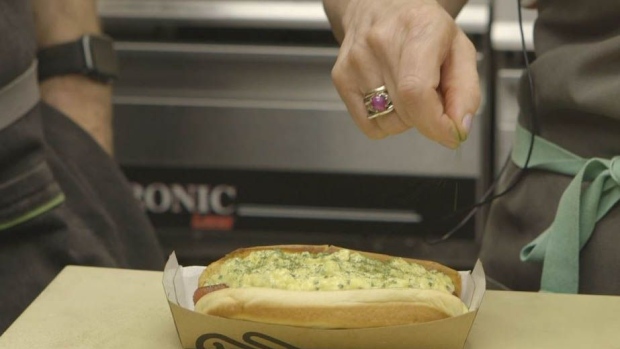 (Bloomberg) -- First things first: Shake Shack Inc. is not rolling out a new breakfast sandwich at this time.

The burger chain recently made news not for new menu items, but for the promise of burger delivery to couches nationwide via a deal with GrubHub Inc. Still, at its year-old innovation kitchen in the basement of the company’s corporate headquarters in New York’s West Village, there is nonstop experimentation. From that space, culinary director Mark Rosati has created such dishes as the Chick’n Parm, with pancetta-tomato and Parmesan cheese sauces, as well as the company’s first dry-aged burger, with semi-soft cheese, pickled onions, and brown butter-pickled shallot mayo.

“Even our sacred cow, the Shack Burger, gets tweaked occasionally,” says Rosati, on the company’s compulsion to test out limited-edition products, whether it’s a Game of Thrones-inspired Dracarys Burger or the LBGTQ Pride Shake, featuring a cake-batter custard and rainbow glitter sprinkles.

As breakfast is the only fast food segment that saw growth, at 1%, in 2018, according to the research firm NPD group, Bloomberg Pursuits challenged Rosati to create a new breakfast offering. Maybe even a breakfast burger?

Probably not, says Rosati. “We have talked about a breakfast burger, but it would need a fried egg, where you could bite into soft yolk, and that doesn’t work for the way we cook,” he says of Shake Shack’s high-volume, griddle-focused menu. Eggs made now are hard-cooked; doing a runny, sunny-side egg up would require too much finesse for Shack kitchens.

Shake Shack currently serves an egg-and-cheese sandwich three ways: no meat, one with Neiman Ranch pork sausage, and one with bacon. The chain primarily serves the breakfast menu at airports and transit areas such as Union Station in Washington and New York’s Grand Central Station. (They sell a lot of early morning burgers—no egg—at airports to travelers flying in from international destinations.)

Rosati’s idea for a new breakfast sandwich is unconventional: hot dogs and scrambled eggs. By our strict definition of iconic New York sandwiches, it doesn’t even count as a sandwich, but we’ll let it slide, just this once.

“Not everyone thinks to eat hot dogs for breakfast, but it’s kind of like pork roll,” he says, referring to New Jersey’s iconic processed meat.

He got the idea from an old friend whose mother cooked him scrambled eggs with American cheese and griddled hot dog chunks every Easter. “When we talked about a new breakfast sandwich, I thought of that immediately. Especially since Shake Shack originally started out as a hot dog cart,” he adds.

Besides buttery soft scrambled eggs and the aforementioned hot dogs, Rosati’s recipe also includes a chive mayo spread on the toasted buns to add a bright hit, as well as a cursory nod to health with a garnish of crushed kale chips. “Now you’ve got green eggs and ham—sort of,” he laughs.

As to whether the Shack breakfast dog sandwich could find a place on the menu in the future? “We never say never. It might make an appearance, if guests request it,” he says.

In a small bowl, combine the mayonnaise and the chives.

Heat a cast-iron griddle or large cast-iron pan. Brush the insides of the buns with some of the melted butter and toast, buttered side down, over medium-low heat until golden, one to two minutes. Transfer to a plate and spread with the chive mayonnaise.

Increase the heat to medium. Griddle the hot dogs until browned all over, about three minutes. Transfer hot dogs to toasted buns.

In a small bowl, beat the eggs with salt and pepper. In a small, nonstick pan, combine the beaten eggs with the remaining melted butter and cook over medium heat, scrambling, until the eggs start to set. Add the American cheese, remove the pan from heat and continue stirring until the eggs have just set into soft curds and the cheese is melted. Spoon the eggs on top of hot dogs. Garnish with the crumbled kale.