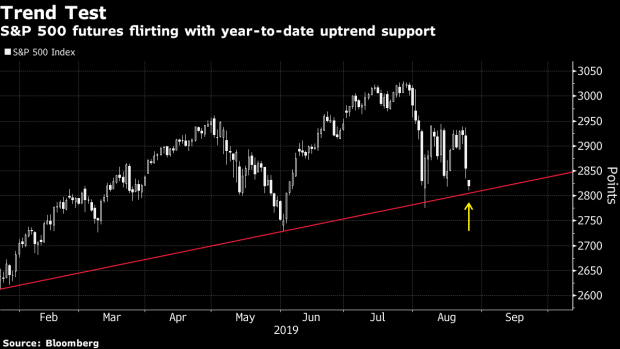 A man looks closely at a computer screen at a securities brokerage in Shanghai, China, on Wednesday, Nov. 9, 2016. Global markets were thrown into disarray as early results from the U.S. election raised the possibility that Donald Trump may prevail over Hillary Clinton in the race for the presidency, shocking traders who had focused on polls in recent days showing the opposite. Photographer: Qilai Shen/Bloomberg , Bloomberg

(Bloomberg) -- Another Monday after a weekend escalation in the ongoing U.S.-China trade war and markets are roiling.

These charts show how traders took the latest salvos in the intensifying trade battle between the world’s two-largest economies.

Having already closed down over 2% Friday, S&P 500 futures took another leg lower, dropping as much as 1.6% before paring losses. The contracts have fallen to test the uptrend in place since the beginning of the year.

“Aftershocks from the latest round of tariff increases announced by Beijing and Washington on Friday will continue to rock global markets when they open on Monday,” said Gavekal Research’s Randhir Prakash. “The silver lining for investors is that each successive round of tariffs in Trump’s trade war has had a smaller, and shorter-lived, negative impact on U.S. stock prices and volatility.”

The Japanese currency climbed as investors sought traditional havens. The yen rose above the 105 per dollar level and the January flash-crash high, to the highest since 2016.

“Speculators will continue to push up bids for the yen,” said Yukio Ishizuki, senior currency strategist at Daiwa Securities Co. in Tokyo. “Japan’s authorities are likely to take a wait-and-see stance for now, but a rally above 100 per dollar could see some response”

China’s currency put even more distance between itself and the 7 per dollar level as the offshore yuan was quoted at an all-time low. It traded at 7.17 in early Asia trading Monday.

Ten-year Treasury yields dropped to the lowest since August 2016 and equivalents in Australia and New Zealand also sank.

“Given the proximity to all-time lows set around the Brexit vote in 2016, we believe the probability of U.S. 10-year yields revisiting (and going through) those levels has risen substantially,” said strategists at Goldman Sachs Group Inc. including Praveen Korapaty.

The move in the yen sparked another flash crash, this time against the Turkish lira. It suggests Japanese retail investors were caught out by the yen’s strength -- the lira fell as much 12% to the lowest since Aug. 2018.

“Given the lira’s nature as a high volatility currency, the surge in the yen must have triggered stop-losses this morning, ”said Toshiya Yamauchi, chief manager for foreign-exchange margin trading at Ueda Harlow Ltd. in Tokyo.

--With assistance from Masaki Kondo and Joanna Ossinger.

To contact the reporter on this story: Cormac Mullen in Tokyo at cmullen9@bloomberg.net

To contact the editors responsible for this story: Christopher Anstey at canstey@bloomberg.net, Adam Haigh, Andreea Papuc