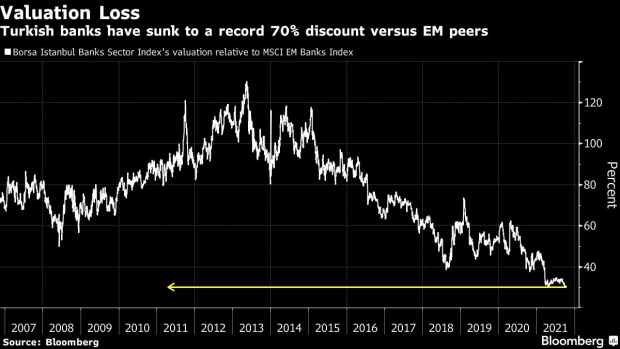 (Bloomberg) -- Once again, Turkey’s currency and debt markets painfully adjusted to central-bank dismissals that signaled monetary policy will stay too dovish to contain inflation. The nation’s stocks, among the cheapest in the world, shrugged off the development.

The following charts capture Turkish assets’ reaction on Thursday as well as their tumultuous ride in two years marked by frequent central-bank changes.

The news couldn’t have come at a worse time for the currency, which had plunged this week beyond an unprecedented 9-per-dollar mark spurred by growing expectations for a rate cut and a risk-off shift in global markets. The losses cemented the lira as this year’s worst performer in emerging markets. It also remains the world’s most volatile exchange rate, with an implied annual move of 16.7%, based on one-month options.

Turkey’s 10-year government bond fell for an eighth day, taking its yield to the highest since May 2019. With inflation close to 20%, debt investors see little scope for a cut in policy rates.

Foreign investors’ perception of risk in Turkey soured on Thursday. The extra yield they demand to own Turkish sovereign dollar bonds rather than U.S. Treasuries jumped 13 basis points to 521, the highest since April 1.

The cost of hedging against a default by Turkey in the next five years soared to a six-month high. While the nation is under no threat of missing payments, the credit default swaps reflect the greater difficulty it may have in earning dollars with an ever weakening currency.

A gauge of Turkish bank stocks erased gains and traded at an ultra-low valuation of 2.6 times projected earnings. Lower rates typically erode lenders’ margins, while currency turbulence could expose them to financial risks. The Borsa Istanbul Banks Index has sunk to a 70% valuation discount to its emerging-market counterpart.