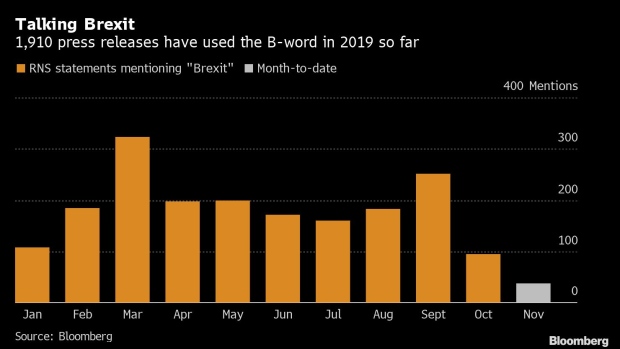 While the early U.K. election has paused Brexit, businesses keep summoning it.

Homebuilders, car dealers, a cigarette company and a photo-booth operator are among firms to have brought up Britain’s split from the European Union in recent weeks. The impact isn’t limited to the U.K.: even Tinder-owner Match Inc. suggested Brexit may have hurt its sales.

Year-to-date, 1,910 statements published by the Regulatory News Service, London Stock Exchange Group Plc’s main distribution feed, have mentioned the B-word. Chatter peaked around the original exit date in March and bubbled up again as the risk of a chaotic no-deal increased in September.

While November is on pace to rank among the quieter months of 2019, with 37 mentions in just over a week, things are likely to pick up again with the Dec. 12 election and another divorce deadline at the end of January.

Here’s a summary of what companies have had to say of late:

The U.K. property market remains in the firing line. London-focused homebuilder Crest Nicholson Holdings Plc sank as much as 11% on Halloween -- a previous deadline for the divorce -- after warning Brexit-related volatility would drag down profit. The company would be a notable beneficiary if a political resolution is found, Liberum analyst Charlie Campbell wrote Wednesday, recommending investors buy the stock.

In related fields, real estate broker Foxtons Group Plc echoed the sentiment, saying political uncertainty weighs on volume and prices in the London residential market. Its shares fell as much as 7.5% following those comments on Oct. 31. Online estate agent Purplebricks Group Plc added to the chorus on Thursday with its warning that political and economic uncertainty has impacted confidence.

A household name fallen on hard times, Carpetright Plc surprised the market on Oct. 31 by announcing it’s set to be taken private for just 5 pence a share. “In line with U.K. retail generally, the current flooring market remains challenging, reflecting the wider economic and geopolitical backdrop,” the firm said in a statement. In their 2006 peak, the shares traded at more than 200 times the recent offer price.

Car and bike-parts vendor Halfords Group Plc on Thursday signaled caution about a further softening of consumer confidence due to prolonged uncertainty over the exit terms and weaker sterling.

It’s not all doom and gloom, though: AB Foods Plc, owner of the fast-fashion brand Primark, said on Tuesday it doesn’t expect Brexit to have a significant impact on results as it does relatively little cross-border trading between the U.K. and the rest of the EU.

Last month it was Pendragon Plc, now it’s Lookers Plc, whose Nov. 1 warning sent its stock tumbling 30% before trimming the drop. But while the firm noted “ongoing weakness in consumer confidence in the light of political and economic uncertainty,” Liberum Capital Ltd. analyst Sanjay Vidyarthi said there were some brand-specific and operational issues at play, and Peel Hunt LLP’s John Stevenson noted challenges related to emissions regulations.

Vehicle classifieds firm Auto Trader Group plc noted a hit to big-ticket items, with revenue from manufacturers and their media agencies declining as Brexit contributed to a lower marketing spend, it said in Thursday’s statement.

Based on Nov. 5 comments from travel-ticket seller Trainline Plc, a slowdown in the economy due to the break-up may reduce the number of trips Britons make to see the U.K.’s favorite staycation destinations. A reduction in freedom of movement between EU countries and the U.K. could also lead to fewer Europeans visiting, the company added.

Cigarette sales don’t tend to track the economic cycle, but even so, Brexit still poses risks for companies like Imperial Brands Plc, the owner of Golden Virginia and Rizla. The company said a potential increase in import duties could impact demand and increase the risk of tobacco smuggling.

To deal with the tax consequences of a no-deal Brexit, the company could deem it necessary to spend about 100 million pounds in a restructuring for tax purposes, it said in its results statement on Nov. 5.

Reduced photo-booth usage for identification purposes has hurt Photo-Me International Plc, which said on Oct. 28 that a drop in group sales was due to “continued uncertainty” around the U.K.‘s European Union exit negotiations. The Epsom, England-based company also flagged a much less-complicated issue: the British government’s decision to allow photos taken with a smart device or a camera at home for passport use.

To contact the editors responsible for this story: Beth Mellor at bmellor@bloomberg.net, Kasper Viita, Celeste Perri