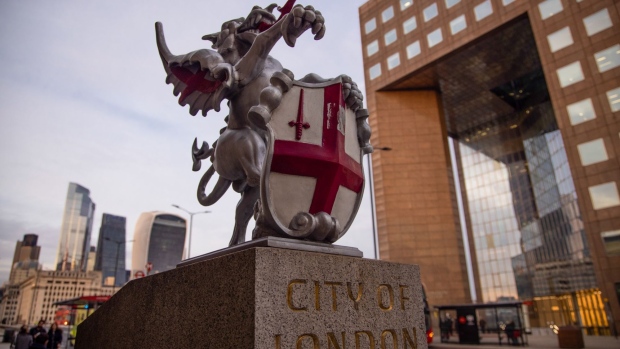 A statue of a dragon marking the boundary of the City of London, UK. Photographer: Jason Alden/Bloomberg , Bloomberg

(Bloomberg) -- Good afternoon from Bloomberg’s UK finance team. Here are five news stories from the Square Mile and beyond that caught our eye this week.

1)  Truss Planning Review of Regulators in City of London ShakeupLiz Truss is planning a review of the UK’s finance watchdogs if she becomes prime minister, potentially leading to the largest shakeup of the sector’s regulatory infrastructure in a decade.2)  Glazer Family Open to Selling a Stake in Manchester United FCThe Glazer family are considering selling a minority stake in Manchester United, as pressure mounts on their ownership of the historic English football club.3)  Wall Street's Record Fines Over WhatsApp Use Were Years in the MakingRecord fines that the world’s biggest investment banks are expected to pay in the coming months reflect years of frustration among US regulators that their investigations were being hampered by unmonitored messaging among bankers.

4) Londoners Are Better Off Returning to the Office as Bills SoarCity of London workers looking to save money may want to embrace the office over winter as the cost of working from home soars alongside energy bills.5)  City Pubs Feel the Heat Even as Boozy Lunches Make a ComebackSuch a return to the office would help the City of London’s traditional pubs, who are struggling as once regular punters work from home and costs soar.