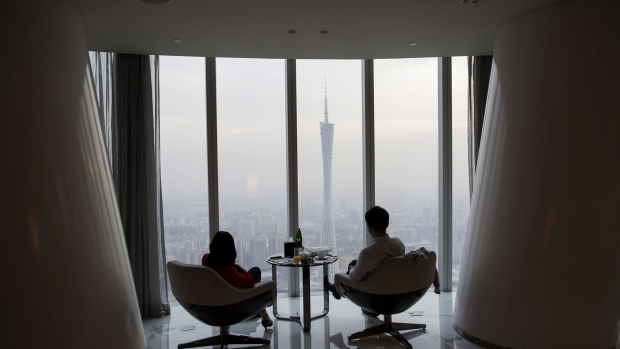 People look out towards the Canton Tower, center, and city skyline from the Tian Bar inside the Four Seasons Hotel in Guangzhou, Guangdong Province, China, on Wednesday, Nov. 20, 2013. New home prices in China’s four major cities rose the most since January 2011, raising concerns of a bubble as home buyers were emboldened by a lack of new nationwide property curbs. , Photographer: Brent Lewin/Bloomberg

(Bloomberg) -- Some of the biggest hedge fund names pitched their strongest wagers and concerns to an audience in Toronto -- from Jimmy Levin’s long view on telecom giant China Tower Corp. to Rob Citrone calling Elizabeth Warren the single biggest risk to the market.

Over two days, investors gathered at the C4K Investors Conference to hear trade ideas. Here’s a rundown of some of the most prominent calls.

To contact the reporters on this story: Michael Bellusci in Toronto at mbellusci2@bloomberg.net;Hema Parmar in New York at hparmar6@bloomberg.net

To contact the editors responsible for this story: Brad Olesen at bolesen3@bloomberg.net, Josh Friedman, Vincent Bielski