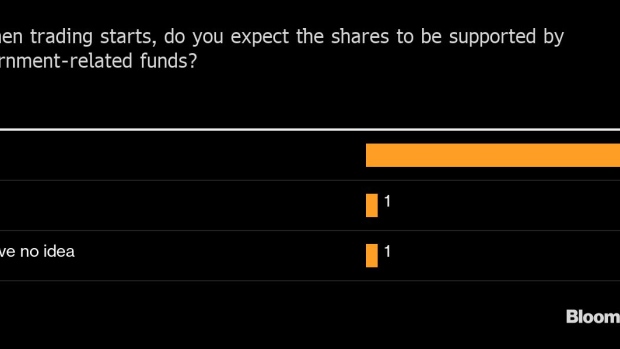 (Bloomberg) -- As Saudi Aramco prepares to unveil the price range for its long-awaited IPO on Sunday, an investor survey points to a maximum valuation for the oil giant of $1.5 trillion.

The poll of 24 money managers by Bloomberg News showed that more than 40% put the company’s fair range at $1.2 trillion to $1.5 trillion. That’s less than the figure of about $1.7 trillion Crown Prince Mohammed Bin Salman is said to be currently willing to accept, having reduced it from an original public target of $2 trillion.

Saudi Arabia is pulling out all the stops to ensure the IPO has as high as valuation at possible. It’s sought large commitments from rich Saudi families, many of whom had members held in the Riyadh’s Ritz-Carlton during 2017’s corruption crackdown. The sale will also be aggressively pitched to retail investors, who’ll be offered loans to finance purchases.

Bankers involved in the initial public offering have presented scenarios to investors with a price spread of more than $1 trillion. Potential buyers will learn the official range on Nov. 17, when the book-building process starts. Eleven of the 24 polled said they will only make a decision then.

The money managers are close to unanimous on one point. They predict the stock will be supported by government-connected funds when it starts trading in Riyadh next month. That isn’t unusual for the Saudi exchange, especially when geopolitical concerns are high.

Here are the results of Bloomberg’s investor survey:

To contact the editors responsible for this story: Celeste Perri at cperri@bloomberg.net, Alex Nicholson