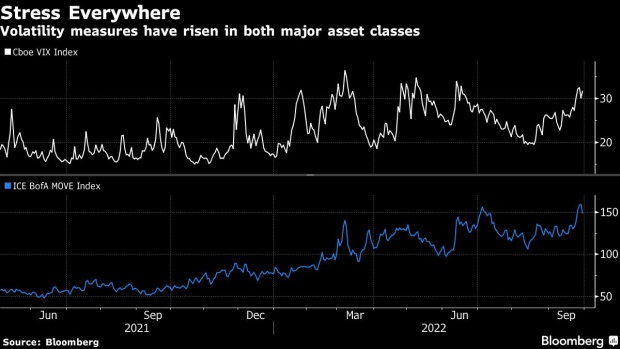 (Bloomberg) -- The word on Wall Street is that the recent bounce in equities is just another bear-market rally. For the gains to last longer, some key pieces need to fall into place.

While the scale of the rebound from last week’s lows was impressive, the consensus among strategists and fund managers is that it’s unlikely to last. From important technical levels to macroeconomic scenarios and market volatility, here is a list of factors that could push equities higher for longer:

To put an end to the theme of “lower lows” we’ve seen in the S&P 500 this year, the June trough would need to hold. The level was tested late last month, but the index quickly bounced back.

Next up, the gauge needs to break above the 50- and 100-day moving averages, roughly 5% above current levels.

The next big hurdles lie about 5% north of that, with the 200-day moving average and the trend line of the 2022 bear market. The S&P 500 fell as much as 17% after failing to break above those two levels in August.

Finally, a break above the last peak, around another 3% higher, would create a so-called “higher high,” while also pushing up the benchmark about 20% from its Sept. 30 closing level. At that point, a new bull market would kick off.

Market turbulence needs to subside further. This is especially true for rates, with the ICE BofA MOVE Index of Treasury volatility still at levels last seen during the selloff at the start of the pandemic.

And while the Cboe VIX Index was never in highly stressed territory, it spiked multiple times above 30, which in combination with lively put option trading, suggests that hedging the downside is an ongoing theme.

“Our view is that until a pause comes in interest rate hikes, the equity volatility will remain elevated, and markets are prone to making new lows as a result,” says Brent Kochuba, founder of analytic service SpotGamma.

This week’s market rally, triggered by a miss in ISM manufacturing data, illustrates what the market wants to see: macroeconomic indicators that are bad enough to encourage the Federal Reserve to approach a pivot point in fighting inflation, but not so awful as to signal a severe downturn.

Over the next five quarters, global growth should average around 2.25% in a base case scenario, according to Citigroup Inc.’s Nathan Sheets. That would be below the 3% trend growth, but not abnormally low by historical standards, they write.

On that note, Friday’s jobs numbers are the next big one to watch, followed by inflation prints next week, where any signs of peak inflation may help markets.