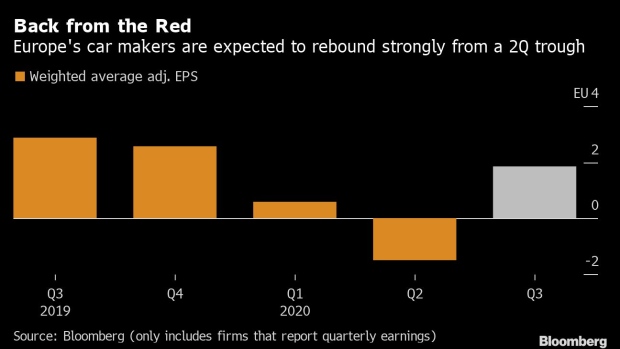 An employee fits a door on a Volkswagen ID.4 sports utility vehicle (SUV) at the Volkswagen AG electric automobile factory in Zwickau, Germany, on Friday, Sept. 18, 2020. Volkswagen is setting a high bar for the first electric vehicle it will build around the globe. Photographer: Krisztian Bocsi/Bloomberg , Bloomberg

European earnings are emerging from a pandemic-induced trough, with Jefferies Financial Group Inc. strategist Sean Darby predicting “the mother of all profit turnarounds” when the bulk of companies begins rolling out results this week. Whether the announcements can fuel another leg in the stock rally is another matter.

Analysts have been jacking up their estimates, anticipating that corporate bottom lines have benefited from “unprecedented” inventory restocking by their clients, a recovery in global trade, a bottoming-out in wholesale prices and low energy costs, Darby wrote in a note. Earnings are likely to be much higher than in the previous quarter, he said.

Still, the benchmark Stoxx Europe 600 Index is already up 31% from its pandemic low in March, reflecting a lot of the expected profit rebound, and the growing number of coronavirus cases is beginning to curb daily activities again. Given that, for investors to bid prices even higher they may need to see further increases in earnings per share estimates and hear optimistic commentary about next year.

“The overall improvement quarter-on-quarter might be quite strong but we won’t be anywhere close to pre-Covid levels,” Joost van Leenders, senior investment strategist at Kempen Capital Management, said by phone. “We’re now in a very concerning situation with the virus cases rising, so it’s very hard to make predictions.”

To be sure, the picture for growth in corporate earnings is still grim, with European companies likely to report a 29% drop from a year ago, according to Morgan Stanley, versus a 35% decline in the first three months of the year and a 61% plunge in the subsequent period, when lockdowns were at their worst.

Helped by eased virus restrictions over the summer and improving economic data, companies in four of the Stoxx 600’s 20 sector groups are set to shift, in aggregate, from losing money in the second quarter to turning a profit in the third. Only one group -- travel and leisure -- is still expected to incur a loss. Of the benchmark’s 265 companies that report quarterly earnings and have sufficient analyst coverage, 50 incurred a second-quarter loss. Of those, 32 are expected to have returned to profitability in the third quarter, according to estimates compiled by Bloomberg.

Analysts see the auto industry having the strongest rebound from the mid-year trough. Among eight European companies that report quarterly earnings, six -- including all German carmakers -- are expected to return to profitability after incurring a second-quarter loss. Still, the group’s earnings look set to remain 35% lower year-on-year, based on a weighted average of analyst expectations compiled by Bloomberg.

BMW AG is likely to reap a record result from its China joint venture while Volkswagen AG stands to benefit from stronger sales both in China and Europe, UBS Group AG analysts led by Patrick Hummel wrote.

While world trade hasn’t yet recovered to pre-outbreak levels, freight companies are doing fine. In fact, transport firms did relatively well already in the second quarter, but they’re still set to post one of the best quarter-on-quarter improvements of the earnings season, according to estimates compiled by Bloomberg.

The mass grounding of passenger aircraft this year took away a significant portion of the global air cargo capacity, and the reduced supply has lifted freight rates, making each shipment more profitable.

Demand is set to increase gradually toward the peak holiday season for logistics companies, Barclays Plc analysts including Mark McVicar wrote, while “very strong” e-commerce in the third quarter should have supported the sales of the domestic last-mile postal providers as well as large global operators.

Supported by the growing online sales volume, consumer durables and apparel is another sector set to bounce back from its pandemic slump, according to estimates compiled by Bloomberg. The world’s largest sportswear maker, Nike Inc., did just that with last month’s blowout earnings, the turnaround propelled especially by China and via e-commerce as the firm stepped up efforts to sell more merchandise directly to consumers.

This is a positive sign for Adidas AG, which is set to turn a loss in the second quarter into a sizable profit in the third, analysts at Commerzbank AG said Oct. 12. The firm should reach or even exceed its guidance for the quarter, benefiting from the return of sports to schools and clubs, analysts at Baader Helvea said.

Danish jeweler Pandora A/S raised its guidance this month, sending the stock to a two-year high after a spike in online demand.

For U.K. stocks, mired in Brexit uncertainty and hurt by the biggest dividend cuts in Europe, “some light is appearing in the winter darkness,” analysts at Jefferies wrote on Oct. 14. Much of this is due to mining firms listed in London.

Increases in U.K. earnings estimates over the past month are “largely confined to one sector, basic resources,” Goldman Sachs Group Inc. strategists including Sharon Bell wrote this month. The strong recovery in activity in China and the rise in steel prices and demand in Europe and the U.S. have been particularly helpful.

Underlining the extraordinary nature of the year of the pandemic, the Stoxx 600 is trading at close to 22 times estimated 2020 earnings, three standard deviations above its five-year average. As wildly anomalous as that is, earnings estimates compiled by Bloomberg also show an assumed swift rebound in 2021, pushing the PE ratio down to about 16, close to the five-year mean. Whether that rebound will happen is the key question.