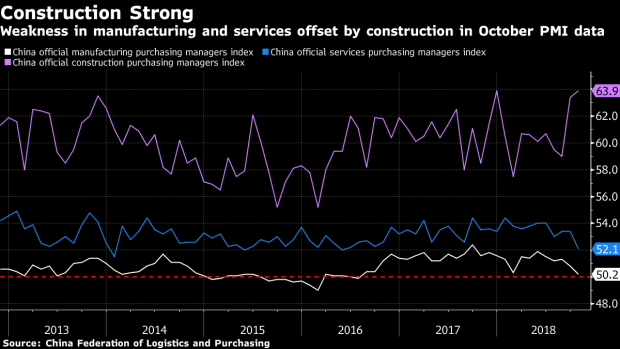 (Bloomberg) -- October data for a range of indicators from industrial production to the property sector will offer a first look at how China’s economy is coping after a slowdown in the third quarter marked the weakest pace of growth in nearly a decade.

Here’s what to watch in the reports, which the National Bureau of Statistics will publish Wednesday at 10 a.m. in Beijing:

Growth in Chinese exports continued to accelerate in October as shippers raced to get goods to the U.S. ahead of a planned increase in tariffs that will take effect in January, according to NBS data published on Nov. 8. But already in September, Chinese industrial production data were telling a different story.

Manufacturing production was up just 6.7 percent in the first nine months of 2018 over the same period a year earlier, marking the slowest rate of expansion in more than two years. That number will probably give a cleaner read of the effects of an escalating trade war with the U.S. than the trade data.

A report published by the China Passenger Car Association this month signaled that the decline continued in October. The headline number for nominal growth in retail sales is, however, forecast to remain steady at 9.2 percent.

Autos account for more than 10 percent of total retail sales, and the big-ticket nature of such purchases makes them an important indicator of the health of the consumer. Other countries, like Germany, are pinning their own hopes for economic growth on Chinese consumers buying more vehicles as well.

Many analysts expect the government to ramp up infrastructure investment to help limit the broader economic slowdown, but there haven’t been many signs of that happening in the hard numbers yet. Growth in infrastructure investment slowed to 3.3 percent in the first nine months of 2018 over the same period a year earlier, marking the smallest expansion recorded in more than four years of data.

That contrasts with 19 percent growth in 2017. The People’s Bank of China flagged the slowdown as a risk to the economic outlook in a quarterly monetary policy report published on Nov. 9.

"Despite the slow response to a more proactive fiscal policy led by fast bond raising, we believe infrastructure investment will likely start to turn around in October," Citi economists led by Liu Li-Gang wrote in a Nov. 12 note.

The slowdown in home sales has yet to appear in data on property development investment, which has been growing near a 10 percent pace all year. Continued investment in property may be helping to offset some of the slowdown in other areas of the economy.

According to results of official surveys of purchasing managers published by the NBS on Oct. 31, strength in construction prevented a broader slowdown in China’s non-manufacturing sectors last month, despite a sharp deceleration in the pace of expansion in services industries.

The economic slowdown also doesn’t appear to have had much effect on China’s official unemployment rate tabulated from surveys of households. It ticked down to 4.9 percent in September, from 5 percent in August and 5.1 percent in July.

The measure is relatively new, and the data only extend back to 2016. The lowest unemployment rate recorded since then was the 4.8 percent reading seen in May and June 2018. An upward trend would probably raise alarm about the effects of the economic slowdown on Chinese households, but so far, there’s no sign of one.

To contact Bloomberg News staff for this story: Matthew Boesler in Beijing at mboesler1@bloomberg.net

To contact the editors responsible for this story: Jeffrey Black at jblack25@bloomberg.net, Karthikeyan Sundaram