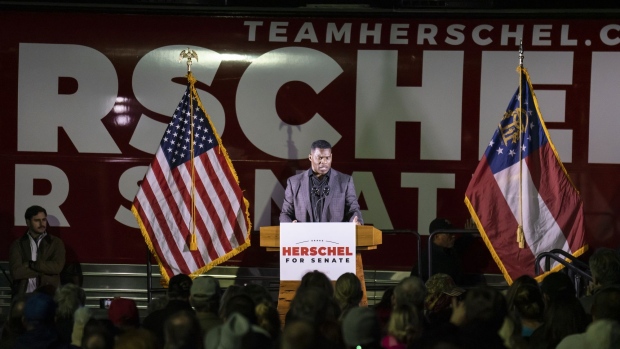 (Bloomberg) -- Herschel Walker’s prominence as a Georgia college football icon has always been a vital part of his political appeal, cushioning him at times as a series of allegations about his truthfulness and past behavior added up. Now he stands to gain from a fortuitous quirk of timing, when the Georgia Bulldogs play a championship game in Atlanta just days before his Senate runoff against Raphael Warnock.

For some Georgia voters, cheering on the top-ranked and undefeated Bulldogs can’t help but remind them of the star running back’s exploits - when he led those same Bulldogs to the national college football championship four decades ago. And that has some Democrats worried.

“It’s interesting how everything has broken in favor of the University of Georgia, and it helps Herschel,” said Frederick Hicks, an Atlanta-based Democratic political strategist. “It helps soften him and soften his negatives, which are very high. I think it also reminds people who are watching the game that there’s an election on Tuesday.”

Those negatives have dogged Walker since the start, multiplying in the closing days of his runoff against Warnock. Walker, who opposes abortion, has been accused by two women of encouraging and paying for them to terminate their pregnancies. Walker has denied the claims. He also has been damaged by charges of domestic violence against his former wife and accusations that he hasn’t been honest about his personal and professional life. Walker, for example, has said that he graduated with honors from UGA. However, the university alumni office says its records show Walker was in the 1985 class, but there is no record of him graduating.

It’s a list that has led even some Republicans to question whether Walker is fit for the Senate. But he has had the aura of a legendary football career to bolster him even as the negative headlines piled up, and Walker played up his football career at every turn in a state where college football is an obsession for many.

While the Bulldogs are not campaigning for Walker, their prominence at the top of the college football world stirs nostalgia and emotion and reminds Georgia voters that Walker is one of the greatest Georgia gridiron stars ever.

On the campaign trail, the now 60-year-old Walker is cheered at political rallies that look more like Bulldog pep rallies, with his supporters wearing the university’s red, black and white colors, and many donning Walker’s number 34 jersey.

“Without a question, beyond any doubt whatsoever, when you say Georgia football, it’s Herschel Walker,” said Reverend Daryl Bloodsaw, a 1991 University of Georgia graduate who like Walker was a Bulldog running back. Bloodsaw is pastor of Ebeneezer Baptist Church West located on the UGA campus in Athens. He has known Warnock, pastor of Atlanta’s famed Ebeneezer Baptist Church, for many years, and supports the incumbent Senator. “Herschel is the first name, the second name, and the third name in Georgia football,” said Bloodsaw, 53. “But he has done nothing nor has he said anything that indicates he deserves this kind of opportunity.”

Vince Dooley, the longtime Georgia football coach who recruited Walker, died in October at the age of 90. But just a few weeks earlier, the beloved coach filmed an ad for Walker’s campaign, praising his former player for his “incredible drive and self-discipline.” And during the weeks of memorials and tributes since, memories of Walker have co-existed alongside those of Dooley. The cover of Dooley’s book, “The 34 Most Memorable Plays in Georgia Football History,” has an image of Walker’s number 34 on the cover.

Georgia fans, or “Dawg Nation” as they are known, are a large and powerful group of voters. Many state residents are lifelong fans, and according to UGA’s alumni office, of the 350,000 living graduates, nearly 220,000 reside in Georgia.

For Warnock, having former President Obama campaigning with him will likely influence some voters. But even Obama can’t outshine football in Georgia. Warnock, 53, a graduate of Morehouse College, the historically Black college in Atlanta, sometimes wears a “Bulldogs for Warnock” button while on the campaign trail. It’s a signal to the Bulldog faithful that it’s OK to vote for him instead of their football hero.

At a recent Walker rally just north of Atlanta in Smyrna, Governor Brian Kemp campaigned alongside the Senate candidate. The crowd was filled with people wearing badges and carrying signs that read “Dawgs for Herschel.” Kemp, who also is a UGA graduate, started his speech with a familiar question that always garners an enthusiastic response: “How ‘bout them Dawgs?”

Addressing the crowd, Kemp recounted a 1980 game in which Georgia trailed the University of Tennessee until Walker, a freshman at the time, entered the game and literally ran over a defender to score the first of two touchdowns. “It’s kind of like this race. After the general election, we were down a little bit. But then in came Herschel Walker,” Kemp said. “That’s what we’re gonna do the first Tuesday of December. We’re gonna run over Raphael Warnock.”