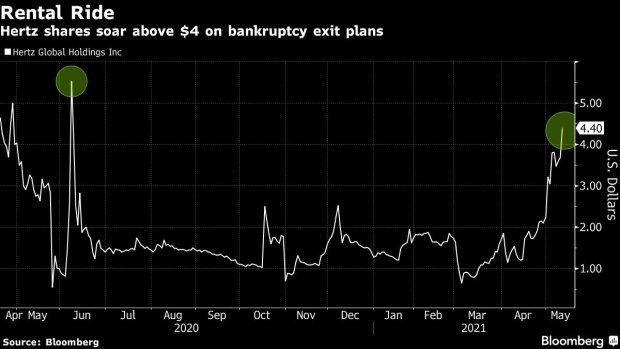 (Bloomberg) -- Hertz Global Holdings Inc. picked Knighthead Capital Management and Certares Management to buy the company out of bankruptcy, capping a dramatic brawl for control of the car renter as travel rebounds, according to people with knowledge of the matter.

The company selected a bid from the firms over a competing group led by Centerbridge Partners, Warburg Pincus and Dundon Capital Partners, the people said, asking not to be identified discussing private plans. The winning plan would hand shareholders value of around $8 a share, made up of about $240 million in cash and warrants for nearly 20% of the reorganized equity, they added.

Hertz shares soared more than 40% Wednesday to as high as $5.19. The recovery is a rare win for shareholders, who are typically wiped out in bankruptcy proceedings.

Investment firms have been dueling over ownership of Hertz for weeks, with both groups seeking to top the other with multiple rounds of proposals. A previous Knighthead proposal valued Hertz’s equity at around $2.25 a share, Bloomberg reported.

The competition came amid surging demand for rentals and summer travel that has let many car renters raise prices while still leaving them without enough vehicles for customers to drive off the lot. Rival Avis Budget Group Inc. has seen its shares more than double this year.

Final proposals from both groups offered lenders and bondholders full repayment along with the share recovery, a relative rarity in bankruptcy proceedings. Hertz initially chose an iteration of the Centerbridge group’s plan, and Walrath last month approved a so-called breakup fee for those funds if they were later outbid.

Hertz sought bankruptcy protection in May 2020 when the near-total shutdown of the global travel industry sent its rental revenues plunging. Equity holders initially appeared to be wiped out, while junior bondholders were slated to take a haircut. Still, Hertz became a popular stock among day traders, who sent shares rocketing on optimism that they could defy the norms of bankruptcy court and win a payout. The stock frenzy even briefly helped the company fund its bankruptcy by selling new equity.