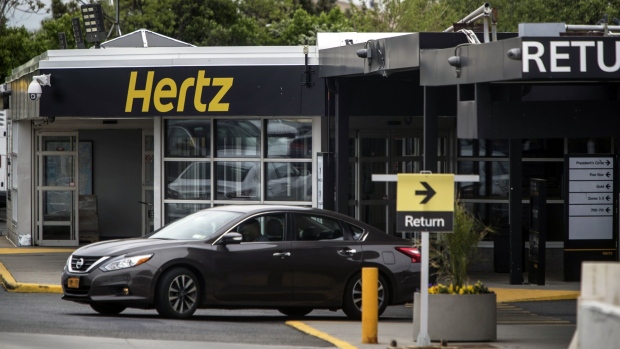 A vehicle exits from the Hertz Global Holdings Inc. rental location at LaGuardia Airport (LGA) in the Queens borough of New York, U.S., on Sunday, May, 6, 2018. Bloomberg/Victor J. Blue

Hertz Global Holdings Inc.’s creditors were offered two bad choices when hammering out a deal to keep it out of bankruptcy: cut the 102-year-old company some slack and hope it recovers, or let it slip into insolvency and try to recoup their investment in sales of its devalued rental fleet.

The holders of Hertz’s asset-backed securities blinked and gave the company until May 22 to pay them about US$400 million. Hertz knew its creditors would want to avoid bankruptcy, which could trigger a fire sale of devalued used cars if the ABS trusts that hold the vehicles have to liquidate, according to people familiar with the matter.

That sets up a parallel quandary for Hertz’s bank lenders, which kept fighting after the ABS holders had agreed to a forbearance.

In the next two weeks, Hertz’s banks -- led by Deutsche Bank AG and Barclays Plc -- must decide whether to allow Hertz to raise more money to pay the ABS holders, or let it slide into bankruptcy, said the people, who asked not to identified because the discussions are private. The possibility of a future bankruptcy filing is still on the table, the people said.

Rental-car companies in bankruptcy typically look to unwind their ABS by selling down the fleet that backs the bonds. The coronavirus pandemic that has squeezed Hertz’s finances, though, has also sent resale values for those vehicles plunging.

That leaves Hertz’s creditors, lenders and investors, including controlling shareholder Carl Icahn, in a three-way standoff.

The holders of Hertz’s asset-backed paper have agreed to delay pressing for a sale of vehicles, but they will need the banks to agree to make them whole, or close to it. The banks, facing the unlikely prospect of recovering close to US$3 billion in debt in a bankruptcy, could extend such a promise but risk greater losses if the rental business and used-car prices don’t recover fast enough.

Icahn may need to put in more money, or perhaps watch his 39 per cent equity stake go up in smoke in a bankruptcy in which equity holders’ claims would be behind those of creditors.

“Hertz is probably trying to do what Avis already did, which is to get the banks to let the company issue more debt,” said Hamzah Mazari, an analyst with Jefferies Group LLC., in an interview. “If the banks say no, Hertz will have to file for bankruptcy.”

Everyone has a lot at stake. Hertz has US$13.4 billion in ABS debt that its holders would have to recoup by selling used cars. Senior slices of Hertz ABS declined in recent weeks, with most now trading below 95 cents on the dollar.

S&P Global Ratings cut Hertz’s corporate credit rating to “selective default” on Thursday, saying it doesn’t believe the company’s liquidity position will improve before its forbearance period ends, forcing it to pursue a restructuring or file for bankruptcy.

If the banks can’t get access to cars in bankruptcy, that leaves about US$800 million in non-vehicle assets that they could target to recoup almost US$3 billion in bad loans, Mazari said.

On the equity side, Icahn’s stake is worth US$169 million with Hertz trading at US$3.05 a share on Thursday. But having paid an average share price of US$29, he has about US$1.6 billion sunk in Hertz.

Hertz shares rose as much as 4.9 per cent shortly after the open of regular trading Friday.

Bankruptcy is tricky enough. Add to that a 70 per cent drop in used car sales in April tied to the pandemic and its restrictions. The used-car auctions in which dealers and rental companies sell their vehicles have shut down save for online sales, leaving inventory stranded on lots and prices plummeting.

Even a few weeks could help the market for used cars perk up as states loosen pandemic shelter-in-place orders and consumers begin to contemplate travel again. And used-car values may not plunge as much this year as some had feared, Morgan Stanley said in a report Tuesday.

General Motors Co. Chief Financial Officer Dhivya Suryadevara said during the automaker’s earnings call Wednesday that its finance company expects the residual value of its vehicles to drop as much as 10 per cent this year.

Still, it would take time to recoup full value. Even when consumers feel comfortable shopping, discounts on new cars will keep pressure on used car prices. Automakers offered 0 per cent financing on a record share of the new cars they sold last month.

If Hertz can avoid a bankruptcy filing and sell off some used cars to generate cash, the company may be able to stay afloat, Mazari said. Then Icahn, who didn’t return a call seeking comment, could put more money in to protect is investment.

“I’m surprised Icahn hasn’t put money in already,” Mazari said. “But he is probably waiting to see what the creditors do first.”