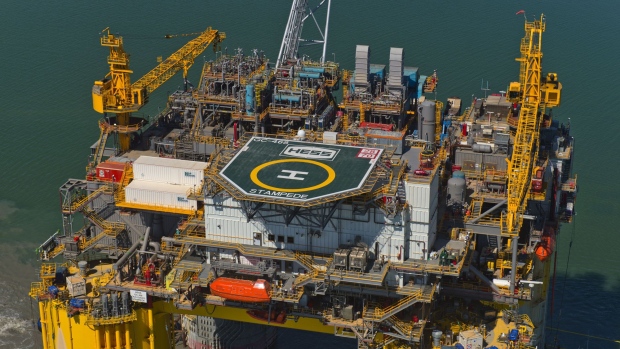 (Bloomberg) -- Hess Corp. said it has expanded its 2022 hedging in Brent oil as prices rallied this month.

Since the end of September, Hess doubled its cover in global benchmark Brent for next year to 60,000 barrels a day and enlarged its hedging in West Texas Intermediate for the same period to 90,000 barrels a day from 80,000, the U.S.-based oil and gas producer said in a securities filing on Wednesday.

Hedges allow producers to protect against sudden drops in prices and act as insurance, and while the decision by Hess will capitalize on a higher price environment, it isn’t without risk.

The company will start losing money on the hedges if Brent goes above $95 or WTI above $90. Front-month Brent futures have already topped $86 a barrel this week, and are up almost 9% so far this month, while the 2022 calendar price has risen to near $80.

The 2022 hedge program cost about $161 million, Chief Financial Officer John Rielly said during the quarterly earnings call with analysts. Hess was looking for price protection as the company continues to fund its investments in Guyana, he added.

Shale producers have been burned by their hedging strategies this year as oil prices surged to multi-year highs. Pioneer Natural Resources Co. said this week that it lost $2 billion on derivatives for the nine months through September and has now liquidated hedges equivalent to about 8% of its total oil production.

“Global oil producers are faced with the enviable dilemma of the most favorable fundamental back drop for prices in years versus the opportunity to hedge out risk at the most economically viable levels in nearly a decade,” said Michael Tran, a commodities strategist at RBC Capital Markets.

“While many of the battle wounds of 2020 have healed throughout this year,” producers don’t need to be reminded “how quickly the tide could turn,” Tran said.

Producers have mostly avoided enlarging their positions this year, fearing investor backlash for spending cash on protecting against a collapse in prices instead of leaving the door open for gains if the commodity rallies. A study of 36 North American producers tracked by BloombergNEF showed about 54% of second-half 2021 production was hedged and 28% of next year’s production.