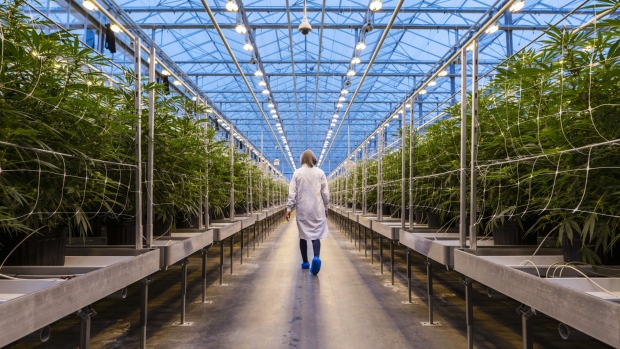 A worker walks past rows of cannabis plants growing in a greenhouse at the Hexo Corp. facility in Gatineau, Quebec, Canada, on Thursday, Oct. 11, 2018. Photographer: Chris Roussakis/Bloomberg

Hexo Corp. says it lost $116.9 million in its first quarter as the cannabis company announced a new strategic plan meant to reduce costs, streamline its business and improve growth.

The Gatineau, Que. company's loss amounted to 46 cents per diluted share for the quarter ended Oct. 31, compared with a loss of $4.2 million or four cents per share in the same period a year earlier.

It came as the company is overhauling its operations and leadership after Hexo co-founder and chief executive Sebastien St-Louis and chief operating officer Donald Courtney departed the company in October.

Days later, St-Louis was replaced with Scott Cooper, who ran Truss Beverage Co., a joint venture between Molson-Coors Canada and Hexo that produces the Little Victory, Mollo and Veryvell beverages.

Cooper was immediately tasked with quelling recurring losses and addressing a recent review of Hexo conducted by PricewaterhouseCoopers LLP.

The review found Hexo "did not maintain, in all material respects, effective internal control over financial reporting" and several factors "raise substantial doubt about its ability to continue as a going concern."

Cooper revealed his answer to these concerns Tuesday, when he unveiled a plan called "The Path Forward.

"The days of unprofitable cannabis companies are numbered," Cooper said on a call with analysts, where he discussed the plan.

As part of the plan, the company will refocus on medical cannabis and integrate its recent acquisitions of Zenabis Global Inc., Redecan and 48North.

Hexo now expects to find $50 million in synergies from those purchases, up from the $35 million it recently announced.

Hexo hopes these moves will help better align supply and demand -- a task cannabis companies like Aurora Cannabis Inc. and Tilray Inc. spent the last year working on in hopes of it leading them to profitability.

However, aligning supply and demand has not been easy because pot companies have had to contend with new shopping habits from cannabis consumers during the pandemic.

Those habits arose as pot companies continued their push to squeeze the illicit market by dropping prices, which has put pressure on their margins but improved their revenues.

Hexo, for example, had a first quarter net revenue of $50.2 million, up from $29.5 million in the same quarter last year.

"We think that the value add we provide with our high-quality products means more to consumers than a race to the bottom in price," Cooper said.

"Successful companies in the future will be those that can successfully run their businesses, and not just by unprofitable market share."

He also announced a series of executive changes, including the forthcoming March 11 departure of chief financial officer Trent MacDonald.

Michael Munzar, chair of the company's board of directors, will step down and be replaced by John Bell, a former member of rival Canopy Growth Corp.'s board.

Jackie Fletcher was named vice-president of science and technology.