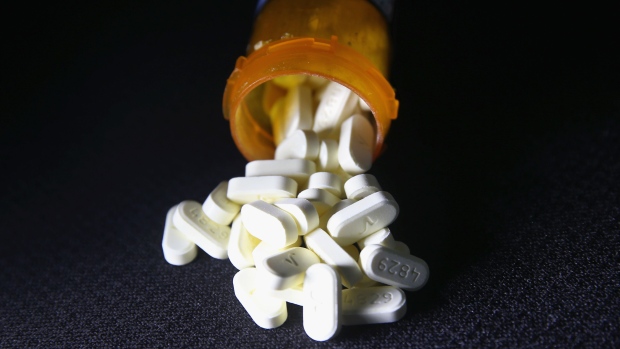 NORWICH, CT - MARCH 23: Oxycodone pain pills prescribed for a patient with chronic pain lie on display on March 23, 2016 in Norwich, CT. Communities nationwide are struggling with the unprecidented opioid pain pill and heroin addiction epidemic. On March 15, the U.S. Centers for Disease Control (CDC), announced guidelines for doctors to reduce the amount of opioid painkillers prescribed, in an effort to curb the epidemic. The CDC estimates that most new heroin addicts first became hooked on prescription pain medication before graduating to heroin, which is stronger and cheaper. (Photo by John Moore/Getty Images) , Photographer: John Moore/Getty Images North America

The pharmaceutical firm and its two former private equity owners kicked off an appeal against the Competition and Markets Authority’s July 2021 finding on Tuesday. The antitrust agency found that prices of liothyronine tablets, used to treat thyroid issues, were raised by more than 6,000% from 2009 to 2017 as they faced no competition.

Lawyers for Cinven said the decision was “manifestly wrong” and was an “enormous quasi-criminal penalty,” according to documents prepared for the hearing.

The CMA has cracked down on the pharma sector with a growing number of investigations including a £70 million fine against Pfizer Inc. and Flynn Pharma Ltd. The agency also flagged antitrust issues with private equity ownership within the sector.

Lawyers for HG and Cinven said the CMA overstepped the legal tests for unfair pricing and its cost estimations were not in line with real life. “The CMA is not a sectoral regulator, it is a competition authority charged with applying competition rules,” Brian Kennelly, HG’s lawyer, said at a hearing Tuesday.

The watchdog’s more than £100 million fine, which was shared between the companies, was its second highest penalty ever.

“The NHS bore the burden of the price increases,” the CMA’s lawyer said in court documents prepared for the trial. “The cost to the NHS of purchasing Liothyronine tablets rose from around £600,000 a year before 2007 to over £30 million a year by 2016.”

Spokespeople for the CMA and the three firms declined to comment.