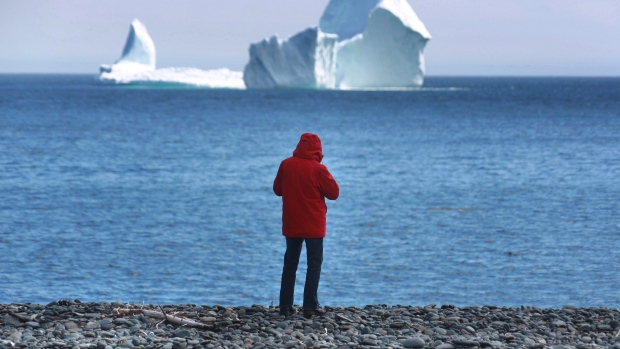 An iceberg is visible from the shore in Ferryland, an hour south of St. John's, Newfoundland on Monday, April 10, 2017. It was the year of the celebrity iceberg, the phallic iceberg and the lying-dog iceberg. More than a thousand icebergs drifted into East Coast shipping lanes this year, with many more closer to shore in Newfoundland and Labrador. , THE CANADIAN PRESS/Paul Daly

ST. JOHN'S, N.L. -- Production at the Hibernia offshore production platform 315 kilometres east of St. John's, N.L., has been halted after an apparent spill of drilling and production fluids.

In a post on its website, the Hibernia management company says a sheen was observed in the water about 2.5 kilometres from the platform.

The company says water sampling late Sunday during well flowback operations indicated an "exceedance" on the produced water discharge and production was immediately shut down.

It says airborne observations on Monday could not confirm the sheen but a vessel dispatched to check it out reported a light sheen. It says there have been no observed impacts on wildlife and personnel are safe.

Hibernia was shut down for a month last year after a release of oil and water from its drain system in August.