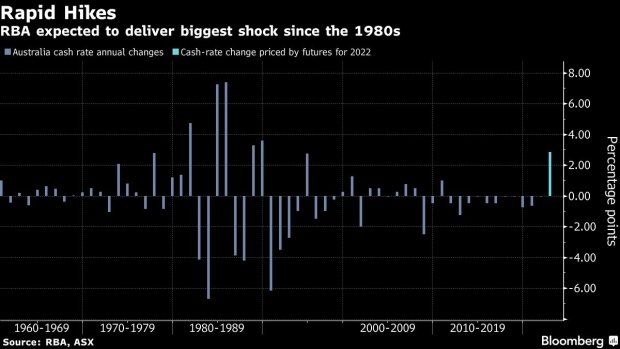 Albanese is just the fourth Labor party leader to win office from opposition since World War II and each has faced major economic hurdles. While the A$2.2 trillion ($1.6 trillion) economy is now larger than pre-pandemic, has more people in work and consumer spending is solid, households and government also racked up heavy debts when borrowing costs were low.

Incoming Treasurer Jim Chalmers said ahead of the May 21 ballot that a victorious Labor party would confront “the trickiest economic conditions” since World War II. He takes over a budget forecasting a combined A$224.7 billion in deficits over the next four years, providing little leeway for the spending Labor has promised. Chalmers plans to deliver a fresh budget this year.

Australia’s household balance sheets look set to come under stress, with the debt-to-income ratio already among the highest in the developed world. Add to that rising mortgage repayments and soaring prices of everyday goods from bread, milk and vegetables to meat and cheese and voters face a squeeze.

It’s these types of challenges in the economy that are beginning to take their toll on business. In the southeastern state of Victoria, builder Anthony Lococo has buckled under the spiraling costs of materials and decided to pull the plug on his construction firm. He’s not alone, with insolvencies on the increase.

“The days of low inflation and low bond yields allowing big budget deficits and high debt are likely behind us,” said Shane Oliver, chief economist at AMP Capital Markets. “This argues for a faster reduction in government borrowing to take pressure off inflation and interest rates and for more policies to boost productivity.”

The government’s coffers have to date fared better than some global peers due to higher prices of key exports such as iron ore, coal and gas.

Labor has a mandate for action on climate change, child care, higher spending on affordable housing and more places in further education. Yet it offered a dearth of measures to boost the economy’s productive capacity that will be key to reining in deficits and lifting living standards.

Anne Nalder, chief executive officer of the 60,000-strong Small Business Association of Australia, said many members are struggling to keep their head above water. She cited the example of a local food importer whose input costs have jumped 10-fold but is unable to pass that burden on to clients.

“If a lot of businesses start collapsing, it’s going to have a huge domino effect on the economy,” she said. “We are facing far worse headwinds than what we did even during the pandemic.”

Figures from Australia’s corporate watchdog show 463 firms entered administration in March, up from 353 in February and 260 in January. Insolvencies were led by construction firms.

Households also face an income squeeze from inflation running at more than twice the pace of wage growth in the first quarter.

“Cost of living will be the biggest economic issue,” said Carlos Cachos, chief economist at Jarden Securities Ltd. “By next year, we’ll start feeling the effects of all the rate hikes that are expected to come through.”

The Reserve Bank of Australia raised the cash rate to 0.35% from 0.1% three weeks ago. Money markets predict it will hike again next month by 40-basis-points and push the cash rate up to 2.8% by December.

“Were the RBA to hike in line with market pricing, it would shift 4.6 percentage points of household income toward meeting higher debt-servicing cost over the next 12 months, our calculations show.”

“This far exceeds any past example.”

The biggest impact of rising rates is likely to be in the housing market, and weigh on private consumption. Property prices soared as the RBA cut the cash rate to 0.1% from 1.5% in 2019-2020. Rate hikes will likely send them into reverse and economists see drops of 10%-15% over the next year.

Volumes of home sales also take a knock when prices drop, flowing on to furniture sales, repairs and renovations as well as real estate services such as conveyances, advertising and removalists.

Recent modeling by Barrenjoey Markets Pty Ltd showed that in the last housing downturn, two-thirds of the fall in per capita consumption reflected the wealth effect and it took six to nine months to hit spending.

Yet, there is also hope the economy will be able to weather the storms, as it did for a record 28-1/2 years until the pandemic.

In Queensland state, Glen Day has been struggling to open for dinner at his two pancake restaurants due to a lack of staff. He says current conditions are some of the toughest he’s faced in 30 years of business, but he’s optimistic he will manage to recruit more workers.

“There are lot of shops around here that are shutting down so I should be able to hire,” Day said from the tourist haven of the Gold Coast. “I’m hopeful things will get better from here.”