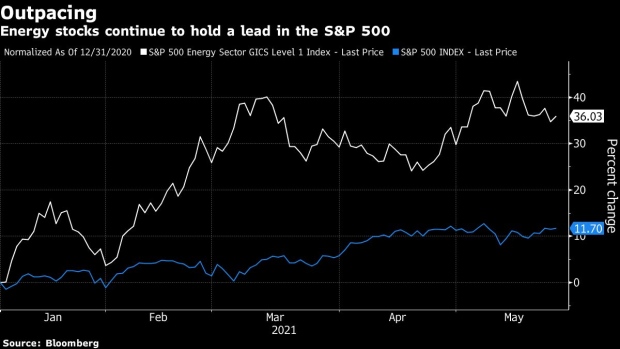 (Bloomberg) -- The pressure on energy companies to address climate change is mounting by the day. But don’t tell that oil and gas stock traders. They’re too busy riding high on surging commodity prices and, in turn, profitability.

In the latest salvos, a Dutch court ordered Royal Dutch Shell Plc to slash its emissions harder and faster than planned. And activist investor Engine No. 1 gained two seats on Exxon Mobil Corp.’s board in a bid to push for climate-change strategies at the oil giant.

These pressures may speed up the transition to clean energy. For now, however, Wall Street doesn’t seem to care. In fact, energy is the best performing sector in the S&P 500 this year, up about 36% compared with a 12% rise in the broader index. The S&P 500 Energy was up 0.8% Wednesday, outperforming broad markets.

If climate activists are to have their way with energy, it’ll have to come from attacking the demand of oil, not supply, according to Rafi Tahmazian, senior portfolio manager at Toronto-based Canoe Financial, who calls the oil and gas group a “hidden gem.”

“You have to reduce the demand and you will kill the oil supply. Until that happens, we do not see any threat to the sector. In fact attacking the oil production just extends the upside for the sector,” Tahmazian concluded.

Last year when oil and gas stocks were among the market’s worst performers, it was low crude prices and demand destruction from Covid-19 doing the damage, not the threat of addressing climate change, according to Bloomberg Intelligence. “The climate headlines are just headlines for now,” BI analyst Fernando Valle said. “Until there is an actual cost associated with these changes, there shouldn’t be major impacts.”

Indeed, Exxon shares have risen over 40% this year as the company has covered its dividends and reduced spending, according to Barclays. “While Engine No. 1’s nominees appear to have merits, we don’t think a major change in XOM’s current direction or strategy would benefit current shareholders,” the bank told clients in a note Tuesday.

While Exxon and its rivals are jumping into clean energy segments, returns still matter to investors, according to Cornerstone Macro LLC. “Public opinion and advocacy are pushing all companies toward more responsible climate initiatives,” global energy strategist Thomas Marchetti said. “However, we expect that U.S. majors will look to invest into those climate strategies that compete with other projects to earn returns over the long run.”

Meanwhile, Canadian oil sands giant Suncor Energy Inc. laid out its goal Wednesday morning to to reduce greenhouse gas emissions by 10 megatons annually by 2030. Suncor said its emissions were about 29 megatons per year in 2019. The stock was little changed.